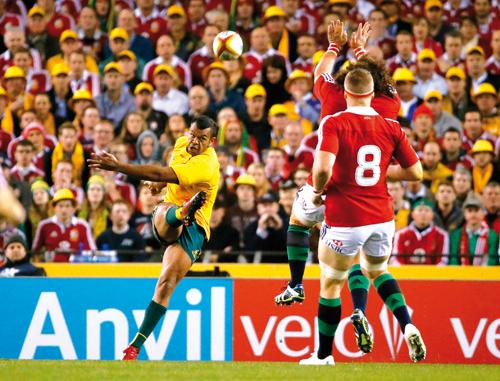 PHUKET: In a nail-bitingly close encounter, the Wallabies triumphed in the second Melbourne Test. 16-15. A solitary point between the two teams. A series now level at 1-1. Over two games, a total score of 38- 37. Some match-up!

Before the game, Lions captain Sam Warburton had referred to “the biggest game of my life.” After the final whistle, Wallabies captain, James Horwill was in tears. The tension throughout a ferociously contested match reached a climax as the Lions, defending a six point lead for much of the second half, finally conceded an Ashley-Cooper try from close in, courtesy of a flat pass from James O’Connor. Leali’ilanu’s nerveless conversion from wide out gave the home team a one point lead with four minutes to go.

But the Lions, refusing to accept yet another last minute defeat (Wales and England have memories of these against the Wallabies), stormed up-field and won a penalty on half-way. In an uncanny repetition of the first Test scenario, Leigh Halfpenny, who had already kicked all fifteen of the Lions’ points, stepped up to win the series. It was not to be. Under enormous pressure, he uncharacteristically left his effort short. Shades of Kurtley Beale in the first Test. As Sam Warburton opined : “We’re going through what Australia went through last week.”

Poetic justice maybe, though Lions supporters will hardly endorse that view. Coach Warren Gatland was more candid saying: “We didn’t look after the ball enough … they dominated the turnover in the second half … that put us under pressure.”

Pre-match hype had focused, rather irrelevantly, on James Horwill’s initial reprieve from a stamping citing, and on George North ‘s apology for gesturing at Will Genia as he scored. But the more important business had concerned team selection. The Lions made five changes – some enforced – selecting brothers Ben and Tom Youngs (the first sibling double act since the Hastings brothers in 1989), Dan Lydiate at flanker, Mako Vunipola at prop, Geoff Parling at lock and Tommy Bowe on the wing. For their part, Australia installed Beale at full-back and brought in winger Joe Tomane.

In a match that turned on hair-breadths, these selections may well have been decisive. Dan Lydiate had a fine match, constantly involved in the maelstrom of rucks and mauls, but Vinopola, who performed creditably in the loose, was a liability in the scrum where his technique was exposed.

As for the backs, they had few opportunities in a match where the ball was rarely spread wide, as both sides sought to eliminate the handling errors of the first Test. The result was an attritional battle, largely played out between two packs who both asked and gave no quarter.

Attention now shifts to the third and decisive game at Sydney’s Olympic Stadium this Saturday. A sell-out is in prospect. There may well be further changes to the teams. Warburton is unlikely to recover from a hamstring injury which saw him off the field for the decisive final minutes, and Corbisiero will probably return to shore up the front row. Both locks and centers will come under scrutiny. For the Wallabies, captain Horwill may yet be censured.

The momentum is with Australia, as is the hand of history. But whatever happens, the final Test will assuredly be a close encounter of the third kind, a battle of epic proportions. There is still everything to play for. As Warburton declared after the match: “We’re definitely capable of taking the Test series, we’ve shown that for two games. It’s going to be won by a whisker next week and I hope it’s us.”

Phuket’s rugby fans are eargerly anticipating today’s encounter if Facebook comments are anything to judge, with the final Test between Australia and the Lions kicking off at 5:05pm local time.