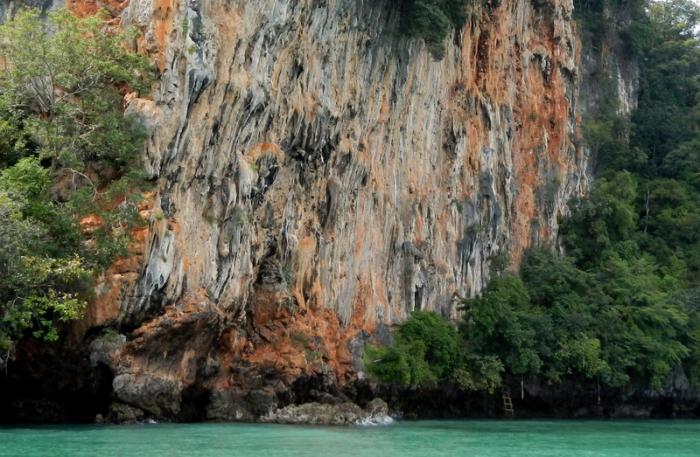 “While the four-month-old climbing bans on Koh Yao Noi and Koh Phi Phi initially seemed to affect only a small group of climbing tourists, the ban on deep water solo climbing – climbing an overhanging rock without a rope over deep water – at Koh Poda, right in front of Tonsai Beach, on February 24 brought a sudden and early end to high season to this small bay between Railay West and Ao Nang,” said Mr Schmitz.

The stunning scenery, warm waters and limestone formations in Krabi brought some of the best climbers in the world to Railay for the deep water soloing. Among the big-name climbers was 15-year-old American climber Ashima Shiraishi who, for a number of years, has been redefining the parameters of sport climbing, making ascents on climbs unconquered by any other woman.

The deep water soloing ban at Koh Poda initially led to hundreds of climbing tourists arriving in Krabi just to learn that they had travelled to one of the world’s most famous deep water solo sites in vain, explained Mr Schmitz.

“As anger and disappointment were vented online, the fact that 90 per cent of climbing routes in Southern Thailand are located in Railay and Tonsai and could be enjoyed as always, was not registered anymore,” Mr Schmitz said. “Three bans over a two month period at a world-famous rock climbing destination were enough persuasion for most climbers to take their holidays elsewhere.”

The damage done by the bans is also being blamed for drops in the number of domestic tourists at the more upscale Railay Beach, located next to Tonsai.

“I went to all the resorts in Railay to collect data for the monthly business meeting: Railay has never seen so few Thai tourists; we believe that the climbing bans are keeping Thai clients and climbers away,” said Sunya Yanggun, who manages Railay Garden View Resort.

Climbers are a tightly-knit community and sensitive to access issues, explained Julamanee Subhate, who runs three of the 17 resorts in Tonsai.

“I have never seen a season so bad for my business,” Mr Julamanee said.

Though more than 500 climbers signed a petition to lift the various climbing bans put in place by park officials, many in the industry – directly and indirectly – fear that the majority of climbing tourists are cutting Thailand from their itinerary, heading for Vietnam and Laos instead.

“Both countries’ climbing spots, Thakhet in Laos and Halong Bay in Vietnam, report higher visitor numbers than usual. Due to the increased demand, a climbing shop in Halong is even advertising employment opportunities for guides on a message board in Tonsai,” said Kidjah Prumrattanapong, the manger of the Forest Resort in Tonsai.

“My friend from Austria went climbing in Laos before coming to Tonsai and he told me that he met more ‘Tonsai climbers’ in Thakhet than in Tonsai. Over there it was so busy that people had to sleep in tents, while here, half of my bungalows lie vacant.”

“Climbing is an extreme sport and a risky activity. Even though there are safety regulations and well-tested equipment is being used, there is still the possibility of someone falling and dying,” said Mr Worapot at the time.

“Normally, climbing can be done in a park if the operators get permission from officers. All they have to do is send a letter requesting permission to conduct this kind of business in the area,” Mr Worapot said.

“In this case, it doesn’t matter if they do apply to designate the area as a climbing zone, as I have already decided to ban this activity. The walls are too steep; it is too dangerous.

“Please do not compare us to other places, as every officer has his own way of making decisions, and I say ‘no’ to this.”

Mr Sorayut explained at the time that he was in discussions with the Department of National Parks, Wildlife and Plant Conservation (DNP) about what criteria should be part of the necessary qualifications to secure permission to climb in the park. However, months later the ban remains in place.

“Climbing will remain banned on Phi Phi and Koh Poda until further notice. The safety of tourists remains our top concern,” Mr Sorayut told the Gazette on April 30.

Mr Sorayut declined to give an update on his discussions with the DNP or to comment further on the topic. However, Thon Thamrongnawasawat, a member of the National Reform Council, who is at the Hat Noppharat Thara – Mu Ko Phi Phi National Park as a policy adviser, was able to provide more insight into the discussions.

“We are still in discussions with the DNP about exactly what qualifications a business must have to secure permission for offering climbing trips in national parks,” Dr Thon said.

“One of the rules that we’ve already agreed will need to be implemented is having a national park officer along as an escort in order to climb walls. This doesn’t mean the officer will actually be climbing, but he will be on site to ensure that those taking part in the activity aren’t damaging our precious natural resources.”

Dr Thon explained that his chief concern is ensuring the protection of the natural parks.

“National parks weren’t developed to be tourist attractions; they were developed to preserve nature. The fundamental needs of tourism and conservation efforts have negative impacts on each other. However, we understand there must be some compromises, but that does not mean sacrificing the beauty of our lands now so that our grandchildren won’t be able to enjoy them.”

Despite Dr Thon’s concerns about the impact of climbers on national parks, climbing communities throughout the world have a long history of environmental conservation efforts and awareness.

“This type of climbing is done outdoors, by a segment of tourists who are keenly aware of the importance of partnering with local authorities for nature conservation here in Thailand, just as they would in their home countries,” said Mr Schmitz.

“On Tonsai Beach, climbers have initiated and joined many garbage collection projects on the beaches and at the climbing crags. We’ve had Tonsai Big Cleaning Day, Beach Clean-ups at Ao Puya – Koh Poda and Trash Hero Railay Chapter just to name a few of the efforts.”

Prior to Dr Thon highlighting his concerns about the possible damage inflicted on national parks through climbing tourism, the main concern voiced by officials had been the safety of tourists.

Statements from park officials such as: “There is no need for an expert’s opinion on this; I can see myself that it is not safe” and “Tourist safety is our top priority, so we are thinking of what needs to be done to guarantee climbers’ safety” have raised a number of eyebrows in the climbing community.

“It is easy to forget that rock climbing is not a traditional Thai sport. This explains the often astonishing lack of understanding that most Thai officials have of ‘farang’ sports, such as climbing or scuba diving,” said Mr Schmitz.

“Lack of understanding can also explain why the local climbing community was neither consulted nor informed prior to the bans. However, what infuriates local Thais working as climbing guides the most are the repeated references to lack of safety.”

There has not been a single case of a serious injury or death of a tourist due to neglect on the part of a climbing guide, confirmed Abdultalep Janjit, chairman of the Railay Rock Climbing Club.

“Let me make this easy for everyone to understand. All legitimate tourism activities must be accommodated by the authorities,” Dr Thon said.

“At this juncture, it’s best to look forward. We will establish rules for rock climbing in national parks in the next two months, as we recognize the importance of this tourism market. Nonetheless, we have to continue with the temporary ban until the ground rules are established. This does not mean it will be banned forever.”