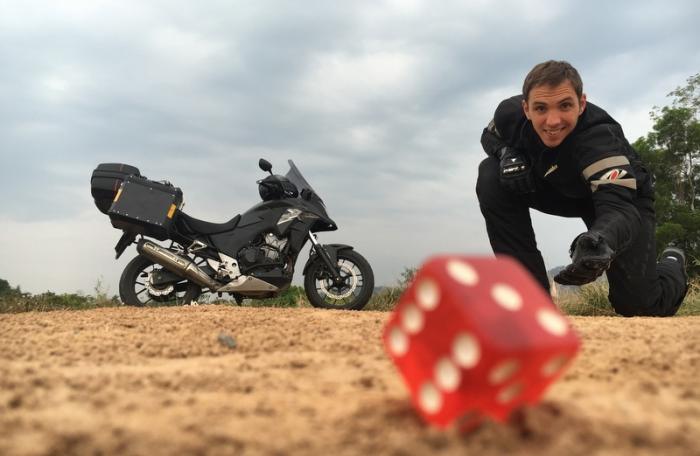 PHUKET: After five years with the Phuket Gazette, our managing editor, Isaac Stone Simonelli, has quit his job and is taking his chances on the road – quite literally.

After upgrading his motorcycle, emptying his bank account, going through the bureaucratic nightmare of obtaining a Thai driver’s license as an American, and finalizing a few other preparations, Isaac will be at the mercy of chance.

“The premise is simple: allow rolls of the dice to determine the majority of decisions faced while motorbiking throughout the world with a limited budget for an entire year,” Isaac’s blog reads: “It’s 365 days of tempting fate, enticing serendipity and letting go of free will – if such a thing exists at all.”

For many of us, picking where to go and what to do based on rolls of the dice sounds like absolute lunacy. But for a thrill-seeker who has made most (and lost much) of his savings on games of high-stakes online poker, the proposition isn’t too worrisome – but stagnation is.

“If I don’t do it now, there won’t be a better time in my life for this,” Isaac told the Gazette. “I have a lot of things that I’m attached to and care deeply about here, but I’m in a unique position where I don’t have anything really keeping me here.”

At the fundamental level, Dice Travels is as much an experiment in probability as it is the last cry of freedom for a 30 year-old American on the cusp of settling down; the entire premise of the dice rolls is based around the avoidance of ‘decision fatigue.’

“The closer we get to a 50/50 line, the more information we need to accurately weigh options and the more perceptive we must be,” Isaac’s blog reads. “If a decision is a 49/51 split, making the right choice will lead to a 2 per cent gain, let’s say, of happiness. However, the energy expended in making that decision could be better used for a decision of greater importance.”

Set to begin in less than two weeks, Isaac’s trip will consist of rolling the dice and seeing where that takes him.

“The first morning, I’ll wake up and roll a four-sided die which will tell me my destination: Myanmar, Malaysia, Cambodia or Laos,” he said. “For the next 365 days, I’ll let the dice make the decision about where I’m going, what I’m doing and what I’m eating, as long as it’s all within the range of my moral code.”

“There’s something very cool about letting go of having any control,” he added.

We wish him the best of luck. You can follow Isaac’s blog at dicetravels.com.