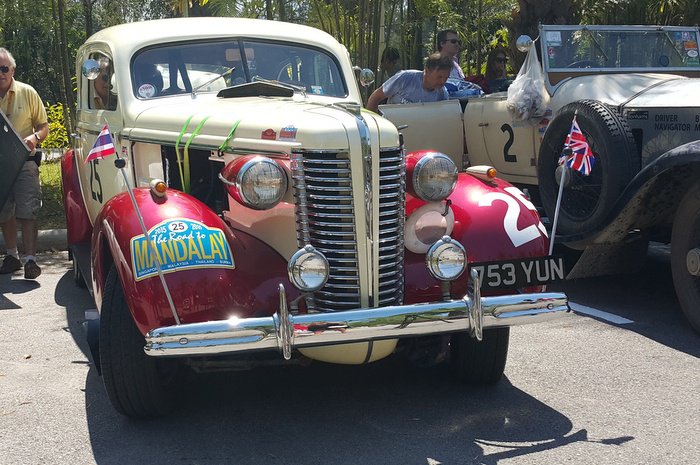 PHUKET: An ambitious endurance classic car rally from Singapore to Myanmar saw about a dozen of the more than 70 magnificent vehicles taking part in the ‘Road to Mandalay’ race complete time trials in Phuket on Sunday. This was enough to inspire the Phuket Gazette to send a TV crew of six on Monday to Khao Lak where the full roster of cars, drivers and crew were enjoying a day off.

Three years in the making, the Road to Mandalay will be the first-ever classic car rally to cross into Myanmar, making it an historic event, said Philip Young of The Endurance Rally Association, which organized the race.

“The hardest thing has been trying to persuade the Myanmar authorities and the government to let us in. They’ve never seen a car rally before and this is the very fist time such an event has been able to cross the border from Thailand into Myanmar,” Mr Young said.

The racing, which has seen a number of time trials, mostly on unpaved roads, has had two crashes.

A 4.5-liter Bentley flipped on wet roads. The husband-and-wife team were taken to hospital in Singapore.
A Ford Customline Saloon also got banged up, though not nearly as severely. The car went into a ditch, damaging the front fender and lights. However, its team were able to carry on.

After spending about seven hours assisting the Gazette in filming the ‘Rose’s Favorites’ feature to air on next week’s ‘Phuket Today’ show, the drivers and navigators were back in their seats on Tuesday morning and ready to rumble on toward Mandalay.

For a detailed report and final results of this ERA event, keep your eyes on the Phuket Gazette.