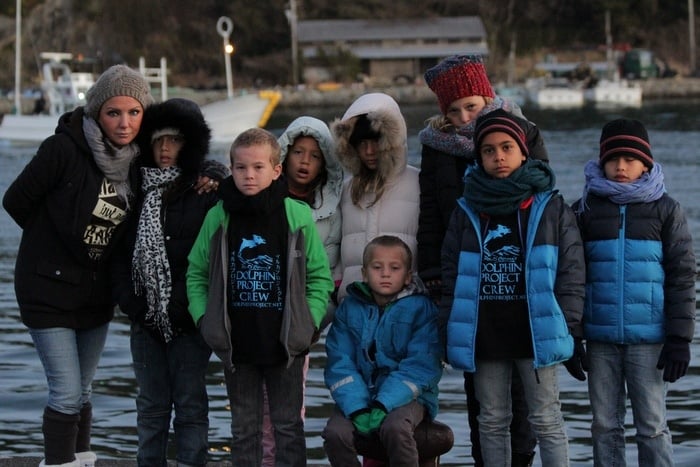 PHUKET: A letter presented by a group of children from Phuket’s Gecko School was accepted by the Taiji Major’s Office, which in the past has publicly supported the annual slaughter of thousands of dolphins.

“We will pass down the history of our ancestors to the next generation. Preserve it. We have a strong sense of pride about this,” Mayor Kazutaka Sangen told The Associated Press in an exclusive interview in 2010. “So we are not going to change our plans for the town based on the criticism of foreigners.”

The Gecko kids raised funds for their travels to Japan with a cycling trip. Video: PGTV

Nonetheless, the Mr Sangen’s office accepted the letter presented by the Phuket children on February 5, which began:

“I would like you to take immediate action to end the hunting of dolphins in Japan, including the bloody and inhumane slaughter of dolphins that takes place in Taiji. Japan’s international reputation is severely damaged by the continuation of these barbaric hunts that are as disturbing to many Japanese as they are to the rest of the world…”

This was the first such letter to be accepted in years, explained Dolphin Project Cove Monitor and Phuket mother Vicki Kiely.

The Gecko school became involved with the Dolphin Project and organized a six-day trip to Japan in response to a dolphinarium being set up in Chalong, which is to house several dolphins from the Taiji Cove (story here).

Tracy Harper, the children’s teacher, had originally planned on joining Ms Kiely to be trained as a Cove Monitor. However, once the children got wind of what was going on, they insisted on joining, Ms Kiely explained.

“What we have done, what the kids have done, is pioneer work. Bringing the kids here and letting them bear witness to the atrocity and use their voice for change – the fact that they brought the letter to the mayor – these are all things that no children have done before,” said Ms Kiely.

“There was no sugarcoating Taiji for these children – it’s impossible to do that. They did everything we [Cove Monitors] do.”

Three of the five days that the children were present where “Red Cove” days, the days in which the cove water turns red with blood from the slaughtered dolphins. Some of the specimens’ lives are spared. However, those dolphins are sent to perform in aquariums and dolphinariums throughout the world.

Renowned dolphin rights activist and founder of the Dolphin Project, Ric O’Barry, encouraged the children to participate in the campaign to stop the annual slaughter.

“As Nelson Mandela said, ‘Education is the most powerful weapon you can use to change the world.’ These brave kids – students from Thailand who have joined the Dolphin Project in Taiji, Japan – are the future of activism. More proof that the ‘future’ starts today,” Mr O’Barry wrote.

The children have been working with Ms Harper and Ms Kiely for almost half a year on their “passion project”, which focuses on understanding the issues surrounding the captivity of dolphins, the slaughters at Taiji and preventing the Nemo dolphinarium from opening in Phuket.

“It’s good we see this because we are the new generation. Our ancestors said, ‘Ah the new generation will fix it.’ So, let’s fix it!” wrote Lou Mouille, who joined the trip, along with his mother Michelle and brother Lee.

Cove Monitor and Director of Shine PR Phuket, Natasha Eldred, joined the Gecko School students for the trip after having encouraged them to take part in an American Chamber of Commerce Thailand (AMCHAM) meeting in November, which focused on marine tourism and the proposed dolphinarium (story here).

“Here we are, the Phuket Pod. Standing tall and proud against the Phuket dolphinarium. Now we all truly understand the trade that is behind these abusement parks all over the world. Say no to captivity. Don’t ever buy a ticket,” Ms Eldred wrote on her Facebook.

“My team, the incredible Gecko Pod from Phuket! Love these people, all of them, like family. We are standing together as one and joining forces with Japanese activists with the same vision”