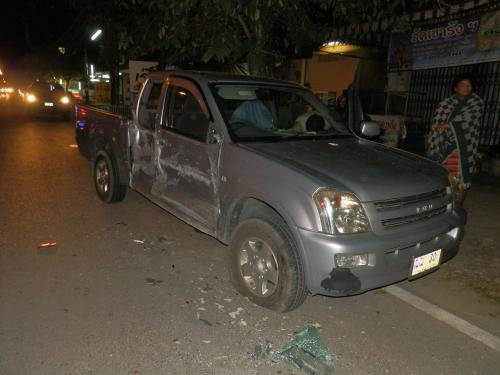 PHUKET: Chinese tourists on board a Phuket tour bus escaped injury last night after the bus they were travelling on sideswiped three parked cars at speed on Thepkrasattri Road.

The bus was returning 20 tourists back to the Supalai Resort & Spa at Ao Por, in Pa Khlok, after a night tour of Phuket Town, said Thalang Police officer Lt Thani Petchswee.

“The accident occurred at about 10:45pm. We arrived at the scene with rescue workers to find a black BMW sedan still pinned to the front left corner of the bus,” he said.

The owner of the BMW, Prajuab Raeprom, 40, told the Phuket Gazette, “I parked my car in front of JayThai seafood. The bus was in the left lane. It crashed into my car and dragged it down the road.”

“Luckily no one was injured,” he added.

Bus driver Raywat Thaweewat, 44, told police he swerved to avoid a car that had pulled in front of the bus from the right-hand lane.

“I swerved to avoid that car, but that made me hit the cars parked along the side of the road,” Mr Raywat said.

Lt Thani said police were continuing their investigation into the cause of the accident.

“We have taken photos of the accident as evidence, and will continue our investigation into the case,” he said.