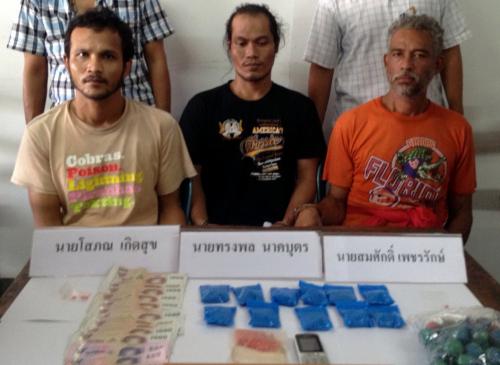 PHUKET: A pyrotechnic meth-dealer announcing full stocks of ya bah (methamphetamine) pills with firecrackers had his bubble burst by Krabi police yesterday.

Following a tip-off, Krabi City Police raided a shack in the middle of a rubber plantation and found Songpol Nakbutr, 34, selling ya bah pills to two customers.

Mr Songpol got the pills from a prisoner in Nakhon Sri Thammarat, Superintendent of Krabi City Police Tuksin Phochakorn said.

“Mr Songpol said the prisoner called his phone and told him where the drugs would be dropped off. He didn’t know the prisoner’s name, and the phone number used to contact him didn’t show up on his mobile,” Col Tuksin said.

“Mr Songpol said that he picked up about about 2,000 pills per time, and sold them for 250 to 300 baht a pill,” he said. “Once he picked up a fresh batch of drugs, Mr Songpol would set off firecrackers to let his customers know that he had drugs to sell.”

Mr Songpol was able to carry on his business in this fashion for about two months without the police finding out.

Police intend to question Mr Songpol further and investigate who supplied him with the pills.