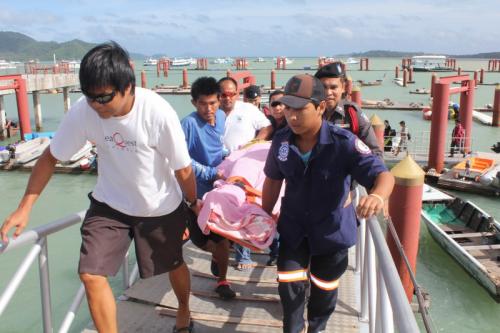 PHUKET: A Chinese tourist on holiday with friends in Phuket drowned this afternoon while on a day trip to Koh Racha Yai, about 25 kilometers south of Phuket.

Capt Wuttiwat Liang-boonjinda of the Chalong Police named the victim as Li Ran, 28.

Ms Li was travelling with five friends who joined about 40 other tourists for the trip to Racha Yai Island, a popular tourist day-trip destination.

“The tour guide said he warned the tourists not to go swimming after eating lunch, but many of them went swimming anyway,” he said.

Ms Li was soon experiencing difficulties due to the large waves and was dragged out into deeper water.

“When the tour guide saw her, she was already far from shore. The guide grabbed a wave board and paddled out to get her, but it was too late,” Capt Wuttiwat said.

Ms Li’s body was brought back to Phuket this afternoon.

Her friends, in tears, accompanied her body during the journey.

The drowning death today follows repeated calls by ambassadors and other international representatives to boost beach and water safety to protect tourists from the dangerous surf at this time of year.

Aussie envoy thrusts weapons in Phuket into the spotlight