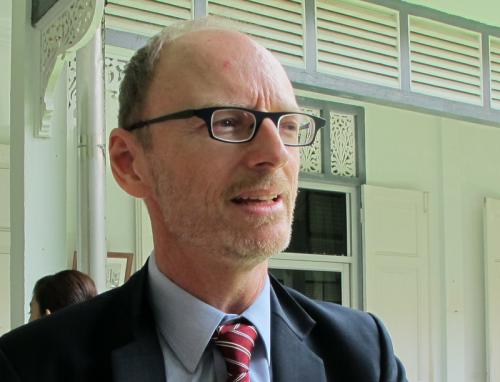 PHUKET: The Deputy Head of Mission at the Australian Embassy in Bangkok, Jonathan Kenna, yesterday placed the carrying of weapons on the streets of Phuket into the spotlight at a meeting with the Phuket Governor.

“I told the governor that the safety of the tourist is the most important issue,” Mr Kenna, speaking in Thai, told the press following a closed-door meeting with Governor Maitri Inthusut at Provincial Hall this morning.

“Governor Maitri and the Australian Embassy agree that we need to work together to protect the life and property of Australian expats and tourists during their stay in Phuket,” he added.

“There should be strict controls on the carrying of weapons. The embassy and the governor will work together on this issue and other issues about tourist safety,” Mr Kenna said.

The call for strict measures to curtail the carrying of weapons in public follows the death of Australian tourist Michelle Smith in Kata last year. Ms Smith died after being stabbed during a failed bag-snatch attempt (story here).

Regarding tourist safety at Phuket beaches, Mr Kenna confirmed that the training program between Australian lifeguards and the Phuket Sea Rescue Center will continue as it has done for years.

“I talked to Mr Kenna about the problems with transportation. Tourists can currently take only one main road from the airport to town – and in rush hour, there are long traffic jams.

“I explained to Mr Kenna that we are trying to find a way to solve this problem, such as offering a sea taxi service from the airport to Patong. Tourists could avoid using the road and travel by boat instead,” Gov Maitri said.

“We provide quality medical services at reasonable prices compared with Australia and many other foreign countries. This makes Thailand an attractive destination for medical tourists,” he said.