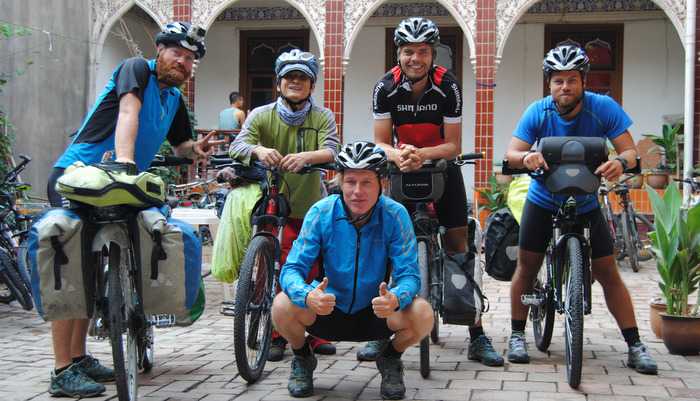 PHUKET: A Chinese man has joined the group of Swedes pedaling toward Phuket from Europe to raise money for a post-tsunami orphanage on the island (story here).

Kunn Lee, who was originally supposed to be cycling southern China and Tibet, changed his plans after meeting Calle Wollgard and the team – he is now bound for the Barhem Muang Mai orphanage.

“We are very happy about this, mostly because Lee is really funny, and a nice guy. However, it’s also a great advantage to have someone who is able to speak and translate for us in a country like China,” Calle told the Phuket Gazette.

“I guess you can say that we were very lucky to find Lee. We really hope that he can go all the way to Phuket and the orphanage.”

Mr Kunn joined Calle, Fredrik Jessen, Tomi Blumen and Christofer Johansson more than a week ago and is looking to share the next 6,000 kilometers of road with them.

With more than 10,200km behind them, the team is about 20 per cent through China. However, it took a big push to escape Uzbekistan.

“Our biggest difficulty since the last update [story here] was to get out of Uzbekistan. It was not because it was that hard to cycle – it was very flat – but because of all the diseases. We just wanted to get out as soon as possible, before we became ill again,” said Calle.

“It was a bit hard mentally because we still had to do about 1,000km before we reached Kyrgyzstan.”

However, once the team reached Osh, in Kyrgyzstan, their spirits soared.

“I think morale hasn’t been higher for a long time during this trip; maybe it is the highest morale we’ve had,” said Calle.

“We had a great time in Osh. We met a lot of travellers from all over the world – some amazingly fun people! We also put the heat of the previous countries behind us. The temperature has started to drop to a comfortable level.”

Fredrick, who had been suffering from serious stomach issues since Uzbekistan, has finally recovered.

“It’s not that easy to count ribs anymore, which I think is a good sign,” Calle said. “He also looks really strong on the road again.”

With only China and Laos left between them and Thailand, the team is clearly excited.

“We still have about 80 per cent of China to do before we are home. But when we are finally done with China, it will feel kind of good and unreal to say that Thailand is our next big destination,” said Calle.

The biggest hiccup the team has faced since entering China was one of Calle’s greatest fears – equipment failure.

“Really, my biggest concern is that the equipment will fail – especially the bikes,” Calle told the Gazette in March.

The back rim of Calle’s bike broke in Kyrgyzstan, and it was impossible to replace when they attempted to swap it out in Kashgar, China.

“It is impossible to find a 28-inch wheel in this part of China. So, in the end, I just had to buy a brand new bike,” he said.

“I really like it so far, so it’s not the end of the world.”

The team is still on track to cross the bridge to Phuket in time to spend Christmas together with the kids of Barhem Muang Mai for the 10th anniversary of the tsunami, and raise millions of baht for the orphanage.

Calle and his team can be contacted at callewollgard@gmail.com.