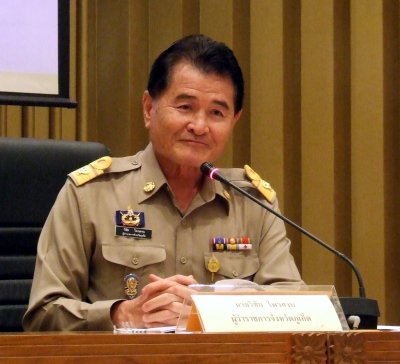 PHUKET: The island’s dream of having a reasonably-priced, efficient public transport system took a small step forward on Monday, when representatives of a Chinese construction conglomerate confirmed their desire to build a light rail network for Phuket.

It was the second visit this month for the Chinese contingent, who on August 2 accepted a copy of a government-commission research study entitled Feasibility Study of Light Rail Transit for Phuket and Phuket Airport Rail Link.

After studying the document, the Ershisanye representatives are now seeking confirmation from the province and central government that they are ready to move forward with the project.

Phuket Governor Wichai Phraisa-ngob said that Phuket has long supported such a project, but that the matter would first need to be discussed by all related organizations.

MP Raywat said the Chinese company is interested in investing in the project, which it would build on a turnkey basis if an agreement could be reached.

The is not the only train project the Chinese are interested in building in Thailand.

The joint venture’s shareholders will be state enterprises of both countries, including the State Railway of Thailand.

The country’s first high-speed train, from Makkasan Station in central Bangkok to Suvarnabhumi Airport, went into operation on Monday.

It started service with a promotional fare of 100 baht for the 28-kilometer trip.

The trains leave every half hour and reach a maximum speed of just over 100 kilometers per hour.