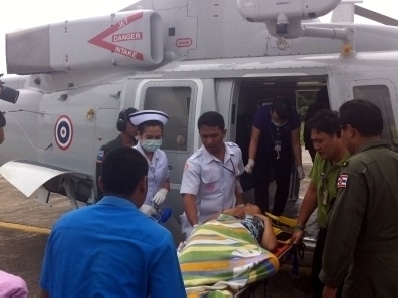 PHUKET: The young Chinese diver airlifted from the Surin Islands to Phuket yesterday is conscious, speaking and able to eat, doctors said today.

Zouxin Jie, 26, was early yesterday afternoon airlifted from the Surin Island National Park by a Thai Navy helicopter to Phuket, where she was transferred to Vachira Phuket Hospital.

She was rescued unconscious on a beach on one of the Surin islands with blood coming out of her ears and bubbles coming from her mouth, Dr Weerawat told the Phuket Gazette.

In the absence of any wounds or trauma to the body surface, the symptoms indicated internal injuries consistent with decompression sickness, he said.

First aid she received at the island prevented her condition from worsening, he said.

Her pulse, body temperature and blood-oxygen levels went back to normal and blood secretion from her ears ceased, though she remained unconscious overnight, doctors said.

An officer at the hospital told the Gazette that Ms Zouxin awoke at about 6am today and was able to sit and eat by herself. She could talk a little, but was still confused.

She is still being closely monitored by doctors, the officer said.

Vachira Phuket Hospital has contacted the Chinese consulate in Songkhla Province, which is now awaiting a response from Zouxin’s parents, who have been informed of their daughter’s condition, the officer said.