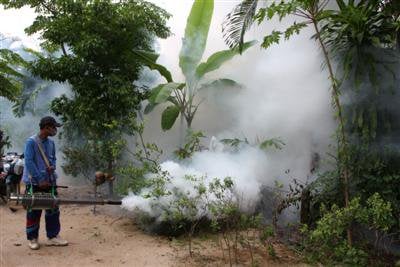 PHUKET CITY: Cases of chikungunya continue to rise in the province, with 349 confirmed cases in Phuket – and the actual figure is probably far higher.

The Phuket Provincial Health Office (PPHO) yesterday confirmed that 331 Thais are receiving hospital treatment for the disease, along with 18 Burmese immigrants.

Two foreign tourists – one from Korea and one Scotsman – have already recovered from the disease, the PPHO has reported.

Based on these figures, the PPHO expect the actual number of cases to be more than 3,000, as most sufferers do not seek hospital treatment, but rather go to clinics or treat themselves.

Thalang District is the highest risk area, with tambon Srisonthorn having the most cases, followed by tambons Cherng Talay, Thepkrasattri, Pa Khlok and Sakoo.

The first confirmed case in Phuket came in March and the disease has now spread across the island.

The disease is spread by the striped Aedes mosquito that feeds in the daytime.

Unlike the more dreaded dengue fever, which comes in four different strains and is more often fatal, those who have been infected with the chikungunya virus once enjoy lifetime immunity thereafter.

The PPHO has set up special units to monitor flu cases in all hospitals on the island, both public and private.. Workers are also on the lookout for cases of influenza caused by the type A(H1N1) virus, which causes swine flu.