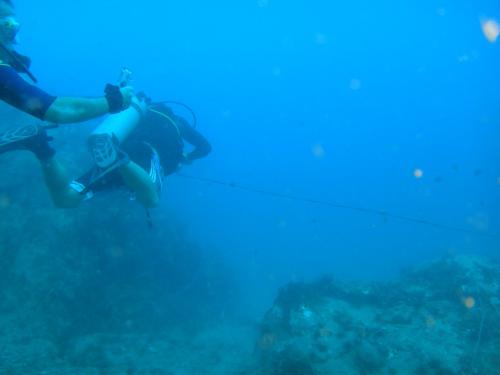 PHUKET: The chief of the Fishery Management Center in Krabi has vowed to bolster patrols at Phuket dive destination Shark Point after photos surfaced of a gill net being dropped over the protected marine area when divers were in the water.

“To ensure diver safety, we will increase the frequency of our patrols in the area to prevent any type of fishing,” said chief Jaroenchai Srisuwan.

“However, this is only a short-term solution,” he added, promising to present the issue to Krabi Governor Prasit Osathanon for a permanent solution.

Musang Rock, better known as Shark Point, is a marine conservation area and is protected under the Fisheries Act, Mr Jaroenchai said.

“No fishing of any kind is allowed in the area,” he explained.

The gill net that sparked Mr Jaroenchai’s concern this week was being set up about a week ago by fishermen while divers were still in the water.

“The net itself is nearly invisible. Staff on our dive boat tried to warn the fisherman in the longtail boat that divers were in the water below, but the fisherman ignored them,” said Joe Blasy, a dive instructor and twelve-year resident of Phuket.

Divers underwater at the time estimated the net was about 200 meters long.

“The net was tangled on several tube and bush corals. There is no doubt that had we not… carefully removed it, the coral, which are actually colonies of thousands of tiny organisms that take years to grow, would have been pulled up, broken and killed,” he explained

Mr Jaroenchai said the recent patrols of the area had yet to turn up any illegal fishermen, but urged the community to help his office protect the reefs.

“The area we are responsible for is far too large. We need everyone’s help,” Mr Jaroenchai.

“If you witness illegal fishing please contact us immediately by calling 075-620510. We are on duty 24 hours a day, and will rush to inspect the area,” he said.

Those arrested for illegal fishing will be handed over to the police for processing and can face charges carrying a penalty of 5,000 to 10,000 baht, one year in prison, or both, he said.

“Krabi has beautiful marine resources that attract many tourists from around the world, but they also attract fishermen,” Mr Jaroenchai said. “We will continue to do our best to educate people about the importance of the environment and the need to protect it.”