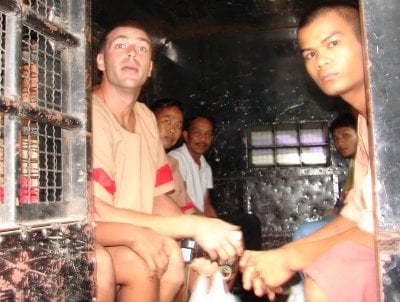 PHUKET CITY: Briton Paul Chetwynd-Talbot was sentenced to 10 years in jail today for the murder of his girlfriend, Debra O’Hanlon, on July 31 last year in the Patong room the couple shared at the time.

The 32-year-old accused and his lawyer, Somsak Chattay, had hoped for a reduced charge of manslaughter, arguing that Chetwynd-Talbot had not intended to kill Ms O’Hanlon.

Judge Nopparat Suwannakorn, however, pointed to forensic evidence indicating that Chetwynd-Talbot had hit Ms O’Hanlon very hard in parts of her body that could have caused death, and sentenced him based on a charge of murder according to Section 288 of the Thai penal code. This offense carries a penalty of 15 to 20 years in jail.

The sentence was cut by a third because Chetwynd-Talbot surrendered to police after the murder and admitted in court that he had killed Ms O’Hanlon.

After today’s hearing, Chetwynd-Talbot maintained that Ms O’Hanlon’s death was “fundamentally an accident”. He told the Gazette, “I threw one punch that I shouldn’t have thrown and this resulted in the girl’s death.

“I wasn’t expecting to be charged with murder. It seems there is no way of bringing that charge down.”

He noted, however, that his lawyer had told him that, given good behavior, he could be out of jail in five years. The time he has already spent in jail awaiting trial will also be deducted from the remainder of his stay in jail.

Asked if he had any message for the family of Ms O’Hanlon, he said, “I’m incredibly sorry. Please know that it was an accident. We were due to fly back to England to try to start again. There was absolutely no malice or premeditation involved whatsoever.”

He paused, then added, “There aren’t enough words to express the guilt I feel, or the sorrow I feel for her family. There is no doubt in my mind that it was my fault.

“It’s something I’ll regret for the rest of my days.”

On hand to observe proceedings was Kate Dufall, British Pro Consul. She brought three books for Chetwynd-Talbot to read in jail. One was A Prison Diary Volume 3, by Jeffrey Archer.