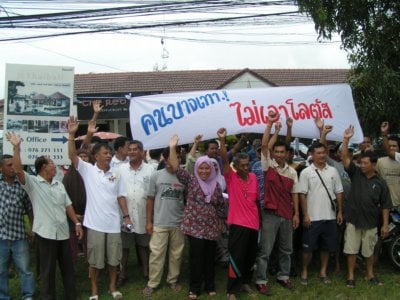 The protesters claim that the work defied a stoppage order issued by the now-disbanded Cherng Talay Tambon Administration Organization (OrBorTor).

The protest was held just around the corner from the project site on Soi Bangtao 2. Throughout the protest, workers continued busily working on the building, now about 50% complete.

Bearing banners with messages reading “Tesco is foreign-owned”, “No Tesco” and “Cherng Talay people don’t want Tesco”, the protesters circulated copies of documents supporting their position, including a copy of a work stoppage order issued on July 27, signed by Samart Sagae, then-president of Cherng Talay OrBorTor.

Another document presented by the protesters was a copy of a complaint to Cherng Talay Police filed by current Acting OrBorTor President Suwat Prakorbpol.

Filed on September 10, the complaint notes the OrBorTor‘s intention to sue Tesco-Lotus for its failure to comply with the work stoppage order, which took effect August 1.

A statement issued by the protesters claimed that the Tesco-Lotus shop will cause many of the 1,000-odd small local retailers to close their stores, and that taxi and tuk-tuk drivers will no longer be needed as often because consumers will be able to walk to buy goods.

The statement also questioned whether the project had gained support through public hearings. Any legitimate public hearing process must include those who stand to be most negatively affected by a project, but in this case none of those parties were even aware that a public hearing had taken place, the statement read.

Martin Clutterbuck of Tesco-Lotus Corporate Affairs office confirmed to the Gazette only that the project in question is a Tesco-Lotus retail branch. He declined to comment further.

Send in your photos!