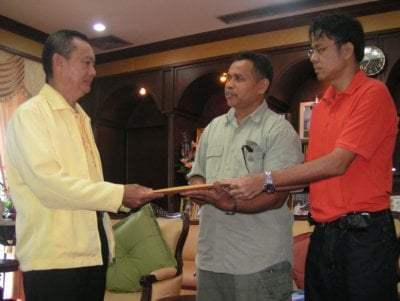 PHUKET: As construction of the controversial Tesco-Lotus Express store in Cherng Talay reaches its final stage, the legality of an alleged ban on its construction remains unclear and local authorities admit they are unsure which authority is responsible for approving – or halting – the store’s construction.

On October 31, Samarn Krohlek and Apisit Ngarnpresertkit, leaders of a local protest against the store, together with five other Cherng Talay residents took their plight to Phuket Governor Niran Kalayanamit. The Governor admitted to the group that he did not clearly understand the background behind the issues involved n the store’s construction.

They explained to the governor that Cherng Talay residents had staged a protest outside the offices of Cherng Talay Municipality, which issued the building permit.

Following that protest, Cherng Talay Municipality apparently ordered a halt to the construction but work at the site continued.

Gov Niran said, “I have heard about this problem in Cherng Talay and that there is some confusion over the jurisdictional boundaries of the two local authorities on whose borders the project sits,” he said.

“I understand it is still not clear which of the two administrations is responsible for the site where the store is being built. I have yet to see the files, but I heard that on October 29 a committee was formed to investigate this case. I think we have to wait for the committee’s findings,” the Governor told the protesters.

K. Samarn said, “We have complained about the illegal construction since September, but now Tesco-Lotus is advertising for new employees to work at the Laguna Tesco Lotus Market, which already has a large sign up – and the construction is still going on. It is not a Tesco-Lotus Express at all.”

Tesco-Lotus Express stores are usually about the same size as 7-Eleven stores. However, the new Laguna Tesco Lotus Supermarket is much larger..

“The fact is that we do not need a Tesco-Lotus in Cherng Talay. The construction has gone on without a public hearing. I worry about why it was very easy to get a building permit but takes so long to stop construction when local people say that it must stop,” K. Samarn said,

K. Apisit said, “We trust that the Governor will keep a eye on this problem. We don’t know what else to do. This will force small shops in the area to close, which will affect about 50% of the people in Cherng Talay – it will change their way of life. Today we came to ask the governor to hurry and stop the construction.”

K. Niran reiterated that any decision to order a halt would have to wait until the results of the investigation committee’s findings are released and a review of applicable commerce law and other statutes.

After the meeting K. Apisit said, “We have complained to the Cherng Talay OrBorTor, Cherng Talay Municipality, Thalang District Office and to the Phuket Provincial Office – everything to stop Tesco-Lotus from opening.”

K. Samarn said he was considering filing a case with the Administrative Court.

A Tesco-Lotus spokesperson in Bangkok to whom the Gazette was referred to declined to comment.

Spa tax to be scrapped