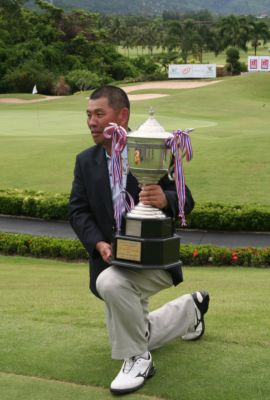 KATHU: On a day of spluttering showers and overcast skies, Taiwanese Chen Tsang Te rose to the challenge in the final round of the US$200,000 Phuket Asian Senior Masters 2008.

Golf’s top seniors from around the world took part in the three-day event at Phuket Country Club, with Australian David Saunders holding a one-shot lead going into the final day’s play.

At five under par on 139, Saunders was in strong contention for the title, but with playing conditions hampered by bad weather, he could only manage a 76 in today’s play, leaving him in fifth place.

But it was Chen who stole the show, shooting a 67 in the final round, the best score in play today, to race up the leaderboard and finish in the top spot with a total of 210, six under par.

Chen shot a day-low 33 on the front nine before completing the back nine in 34 to take the title by one shot.

In the team competition, Ramkamhaeng University took the title with an overall score of 221, 19 shots clear of Cocoon, in second place.

Divers help out on Earth Day