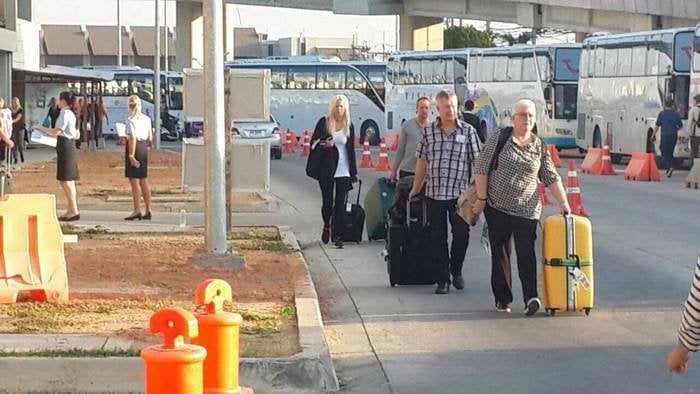 PHUKET: Airports of Thailand (AoT) officers are scrambling to take care of passengers arriving on charter flights at Phuket International Airport, as the tourists’ buses are now being forced to park at one of the unfinished parking buildings.

“Due to the airport expansion, buses have to park quite far away from the terminal,” said Pakin Sirijun, deputy vice president of the AoT’s Landside Airport Operations Department. “Yesterday was the first day that we had the buses parking in front of the new parking building, and it caused problems.”

Mr Pakin said that AoT officers and Phuket International Airport staffers were aware of the inconvenience and were working on finding a solution, as the airport expansion, which will have an indoor walkway, will not be complete for at least another two years.

“We have had vans shuttling some passengers to the buses, but that hasn’t been enough. We will meet on Thursday to brainstorm a more convenient option for group-tour passengers,” Mr Pakin said.

“I would encourage all passengers who have been inconvenienced to file a complaint via our website so that we have more input on how to improve our services.”

Though charter-flight passengers are being forced into a long walk with baggage to and from the airport, cars are still able to drop off and pick up people in front of the terminal as usual, Mr Pakin confirmed to the Phuket Gazette.

“We are sorry about any inconvenience, and will have this sorted out as soon as possible,” Mr Pakin said.