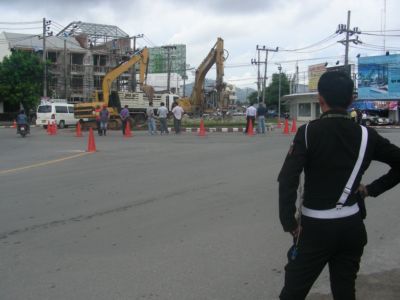 PHUKET CITY: Instead of removing and preserving the fountain that has been the centerpiece of Chalong Circle for years, workers today demolished the landmark that local residents had affectionately nicknamed “the birdbath”.

The decision follows years of complaints of traffic jams at the critical southern junction.

However, progress on the decision whether or not to remove the roundabout stalled as it required input from at least the Provincial Highways Office, Rawai Municipality, Chalong Tambon Administration Organization (OrBorTor), Chalong Traffic Police and the Phuket Provincial Administration Organization (OrBorJor), which years ago funded and installed the fountain at the circle.

Tired of waiting for the project to move ahead, Phuket Vice-Governor Worapoj Ratthasima on September 1 told Phuket Highways Office chief Saroj Suwinchai to speed up the project.

The heads of the government agencies involved met on Monday, and demolition work started today.

The demolition and removal is expected to be complete by tomorrow, including resurfacing the area with tarmac where the roundabout once stood.

The entire project will cost no more than 300,000 baht, Mr Saroj told the Gazette on Monday.

“Vehicles entering the junction from Chalong Pier will be forced to turn left onto Wiset Rd. They must do a U-turn and come back and wait at the lights to enter the junction again,” Mr Saroj had earlier explained to the Gazette.

The removal of Chalong Circle has been the source of much debate among foreigners living in the south of the island, and many foreigners have written to the Gazette over the years complaining that the only times when traffic tailbacks have formed at Chalong Circle have been when police or traffic lights have regulated traffic flow through the junction.

Changing the traffic flow at the junction also raises the problem of what to call the intersection, said Mr Saroj, as it had become famous as Ha Yaek Chalong, literally meaning “Chalong Five-ways.”

It will now become a “four-ways”, he said.

Some of the officers at the meeting were not convinced that removing Chalong Circle would be the solution to their traffic woes, with some officers suggesting that a roundabout be put back in the center of the junction if the this latest project fails to deliver the intended result.