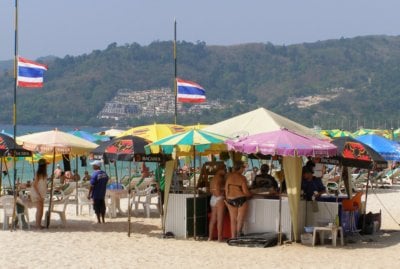 PATONG: Patong Municipality has warned Patong beach vendors against cooking and selling food on the beach, saying violators will be arrested.

“If we find any vendors selling food on the beach we will arrest them. Only drinks can be sold on the beach and all vendors doing so must pay a tax and trash-collection fee to the municipality,” said Chairat Sukkaban, Deputy Mayor of Patong Municipality.

“Any vendors caught breaking the regulation will have their beach chair and umbrella stand concession revoked. Next week, I am going to file a report asking for help from the District Office and Provincial Office. I will also ask police to monitor the area,” he added.

Seri Mekcharoenniwattana, from Narathiwat, who has been a vendor on Patong beach for more than 15 years, said, “I know the municipality has talked to us many times [about selling food], but some people are still cooking food on the beach.

“I don’t want to blame anyone because I understand that they just want to make money. I always follow the rules, I pay tax every year and pay the fee for trash every six months.

“I think that cleanliness is the most important of aspect of a tourist destination. Cooking is not suitable on the beach. It’s a place to relax, not cook. When tourists are hungry they can walk up to the footpath, where there are many vendors,” said K. Seri.

“I would like all vendors to respect the rules, because it is good for both us and the government officers,” he added.

Phuket Provincial Police Commander Pol Maj Gen Decha Budnampeth told the Gazette that he hoped the municipality, as the local body with jurisdiction, would try to settle the matter before involving the police.

Chalong Circle to be removed?

Year of the Rat a boon to Phuket tourism