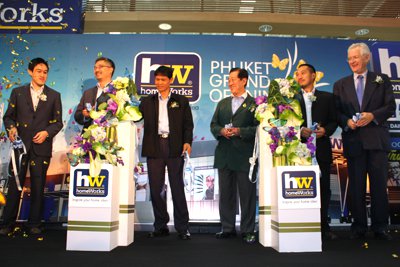 WICHIT: After a year under construction, the 1-billion-baht HomeWorks home improvement mall opened its doors to the public for the first time on Saturday, October 25.

Built by the CRC Power Retail Company Limited, one of the many arms of the massive Central Retail Corporation, the bypass road’s latest mega-retail outlet is located at the Darasamuth School Intersection, right across the road from Central Festival. The two centers will soon be connected by a large pedestrian overpass, according to information given the press at the opening ceremony.

The ribbon-cutting ceremony, presided over by new Phuket Governor Preecha Ruangjan, was attended by a host of celebrities, VIPs and other dignitaries.

A press release circulated by CRC Power Retail said the new center is the largest stand-alone venue of its kind in the southern region, with 26,000 square meters covering 27 rai and parking for 1,000 cars.

HomeWorks itself covers 8,000 square meters on the top floor, while outlets operated by well-known retailers like PowerBuy, Supersports, Modern Form and True Value take up much of the rest of the retail space. In total, the project has space for more than 100 retailers.

CRC Power Retail Vice President Pong Skuntanaga told the press that HomeWorks expects some 100,000 customers per month, with about 70% of sales direct to homeowners and the remainder to the building trade. Of the total, about 30% of the buyers are expected to be foreigners.

The top floor of the two-story complex houses HomeWorks, PowerBuy and a “Work Out” branch of sporting goods retailer Supersports.

The ground floor features a Modern Form furniture outlet covering 2,000 sqm, True Value hardware and numerous other smaller retail and food & beverage outlets, including such international American chains as Starbucks, KFC and Mister Donut. There is also a Geo Kitchenware shop and SE-ED bookstore, as well as bank branches and home decor shops.

CRC Power Retail Marketing Director Nilubon Jirapattanapong said at a press conference that HomeWorks was offering “stunning” discounts under its “Crazy Price” promotion package over the first two days, as a way of luring first-time shoppers.

Target customers will be from Phuket and nearby provinces such as Krabi and Phang Nga, he said.

The Phuket branch of HomeWorks is the seventh opened by CRC Power Retail, the flagship store of which was opened at Central Bangna in Bangkok in 2001.

All the retail outlets will face stiff competition from competing outlets already operating along the bypass road, which has seen a huge proliferation of large furniture and home supply retailers over the past five or six years.