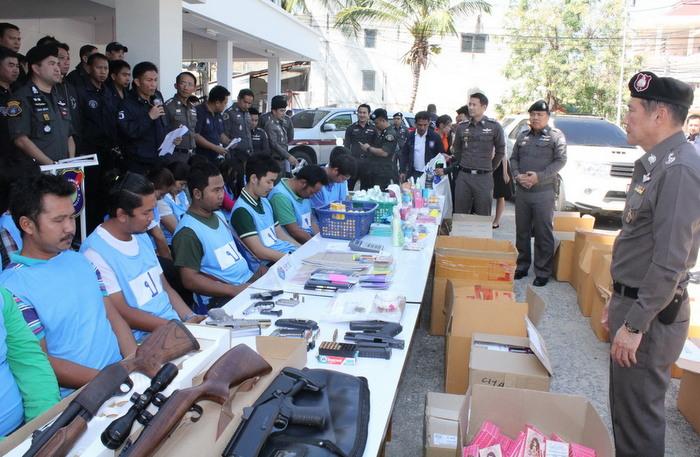 PHUKET: A total of 28 jet-ski operators were arrested during a Central Investigation Bureau (CIB) raid on Phuket yesterday.

Despite numerous accidents and a legacy of scamming tourists, jet-ski operators have continued to work under an umbrella of lax enforcement of jet-ski rules and regulations.

“We arrested the jet-ski operators for renting their vehicles to tourists without provincial permission,” said Deputy Commissioner of the Royal Thai Police CIB Adis Ngamchitsuksri.

About 300 officers took part in the raid that busted the jet-ski operators, along with alleged drug dealers, illegal firearm owners, copyright infringement vendors and those participating in a number of other illegal activities.

“With the ‘Prai Fah Na Sai’ [Peace for the People] raid we are targeting major tourist destinations for all types of criminal activity,” said Maj Gen Adis. “Phuket plays an important role in the Thai economy, generating a great deal of revenue. It is essential that we protect it.

“We are concerned that the wealth and opportunity in Phuket will draw both domestic and international criminals to the island,” he said.

A total of 58 people were arrested during the raid, including 14 for whom arrest warrants had already been issued.

In addition to those busted for allegedly working as illegal guides, being in possession of drugs, fake cosmetic goods or illegal medicines, seven were arrested for the illegal possession of firearms.

One of the seven was Srisoonthorn Mayor Worawut Songyos, confirmed Gen Adis.

“Though we seized firearms, we are still looking into whether or not they are illegally owned. At this point, we have only pressed preliminary charges. However, among the hunting rifles seized, we found a pump-action shotgun and semi-automatic handguns,” said Gen Adis.