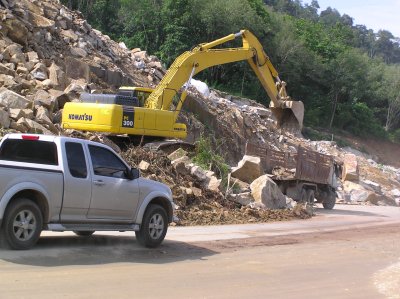 PHUKET: Work on the 111-million-baht project to widen the bypass road will be completed about six months behind schedule, in March 2006, the government official in charge of the work estimates.

The artery is being widened to 24 meters in order to accommodate Phuket’s ever-growing number of vehicles. The section from Tesco-Lotus to the Darasamut School Intersection will be six lanes wide when the work is completed and the northern section between Tesco and the Boat Lagoon will have four lanes.

There will be a building exclusion zone 40 meters from either side of the median strip.

The blasting, previously limited to Mondays and Thursdays, had been increased to alternating days in order to finish the project as soon as possible, he said.

Commuters should expect delays while the blasting is taking place and traffic is detoured to Soi Paniang, he said.

CHRC originally had 210 days from May 7, 2004, to complete the work, or until September 28, 2005. The deadline was extended until January 26, 2006, after red tape resulted in the province taking some eight months to issue the necessary blasting permit, he said.

The company will face a fine for each day the work runs over the January deadline, he added.

“The rain has also been partially responsible for the delay in the project, which I expect to be completed some time in March” he said.

Tour bus driver Niphon Pholkaew told the Gazette that traffic congestion associated with the project can add an hour to the time it takes him to drive passengers from a tour office on the bypass road to the Kata Thani Hotel.

But like most island residents he sees the project as a necessary evil and is willing to put up with the inconvenience.

“There are more and more cars using the road every day, so it makes sense to widen it. They have done a good job putting up signs to show the detour routes,” he noted.

The owner of a batik shop opposite the current site of the blasting work is no fan of the project, however.

One round of blasting caused rocks to rain down on his building, damaging the roof, he said. CHRC later repaired the roof, he added.

He also told the Gazette that the work had hurt his business by limiting the amount of parking space available.

K. Boonyakiat said that the contractor was responsible for any damages related to the blasting work. Anyone suffering damage could contact the company directly to seek compensation or, if that does not work, file a complaint with the police, he said.

Carnival “to be more international’