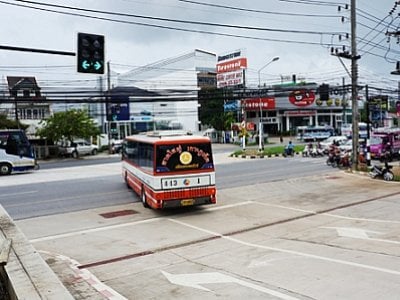 PHUKET: The Phuket Bus Terminal 2 finally went into operation this morning – more than 28 months after the completion of the structure.

Mr Teerayut estimated that about 70 per cent of the public is already aware that almost all inter-provincial buses will operate out of the new station, which is located on Thepkrasattri Road southbound in Rassada, not far from the Supercheap shopping complex.

PLTO officers were posted at the station today to monitor operations and give information for first-time users.

Passengers unaware of the change who arrived at the old Phuket Bus Terminal 1 on Phang Nga Road in Phuket Town were instructed to take the Phuket Provincial Administration Organization “Pink Bus” or pho thong, which connects the two stations at a fare of 10 baht.

“The first outbound bus for Trang left at 5am. The first inbound coach arrived from Bangkok early this morning,” he said.

Mr Teerayout told the Gazette that measures are in place to get arriving passengers to their final destinations by a variety of public transport options, all at fixed prices.

“Passengers have a choice to take any kind of public transportation they prefer. We have a fixed-price taxi service counter, a pho thong, and motorcycle taxis. All prices are clearly displayed on large board, so passengers will know they are not being ripped off and overcharged,” he said.

“If we receive any reports of taxi drivers breaking the agreed pricing structure, we will ban them from picking up passengers at Bus Terminal 2,” he added.

Having watched the station sit dormant for well over two years, many passengers were excited about using it on its first day in operation.

Sansern Sukantanit, a local resident who travels to other provinces regularly by bus, told the Gazette: “I learned that the new station would go into operation today when I called the tour bus company to book my ticket. I have seen and heard a lot about the new bus terminal. I am glad to finally get a chance to use it today.”

“The terminal is clean and well-organized. I hope it can remain this way,” he added.

The opening is expected to greatly ease traffic congestion in parts of Phuket Town, especially the Satree School Junction where Thepkrasattri Road crosses between Damrong Road and Tungkha Road.

For more information about new services at the station read the previous report by clicking here.

Phuket to be ‘Atlantis of the East’? Not on Gov Tri’s watch