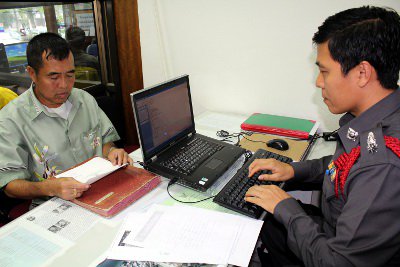 PHUKET: In the face of widespread rumors of Phuket becoming the “Atlantis of the East”, Phuket Governor Tri Augkaradacha has jokingly declared that he would be happy to resign his position if the island sinks into the Andaman Sea.

“Rumors are rumors,” Gov Tri said. “I don’t think Phuket will sink. In fact, I’ll stake my position as a guarantee. If it happens, I will be happy to resign as governor.”

On a more serious note, Gov Tri’s office has filed a police complaint against any individuals found to have created doomsday warning leaflets or posting internet claims that Phuket will be destroyed by a natural disaster on April 28.

The complaint was filed at Phuket City Police Station by Wiroj Suwanwong, chief of the Department of Disaster Prevention and Mitigation office in Phuket Town.

Any person convicted of spreading rumors or disinformation that cause people to panic is in violation of Article 384 of the Criminal Code and can face up to one month in prison, a 1,000 baht fine, or both.

Gov Tri said he was concerned that the doomsday prediction had damaged Phuket’s reputation.

“These rumors have caused panic among the people who live in Phuket and it is bad for Phuket’s image,” he added.

Gov Tri also briefly spoke about the need to help people whose houses were damaged in the recent quakes to regain their confidence.

“I will try to get the budget to fix the homes as soon as possible,” he said.

“To educate Phuket residents, I also will have a handbook produced on what to do in the event of a major earthquake,” he said.

“Earthquakes are a relatively new phenomena for Phuket, much like the tsunami was in 2004,” he added.

However, he does not want Phuket to be left unprepared in the event that a serious quake does hit.

He plans to invite earthquake specialists from Japan to Phuket to educate business owners and community leaders, preparing them for the possibility and how to react in such an event, he added.

Five earthquakes, all with epicenters in Thalang, were recorded yesterday.

Thus far today no tremors have been reported by the Thai Meteorological Department, which recently set up sensors in three locations in the district and is monitoring the situation carefully.