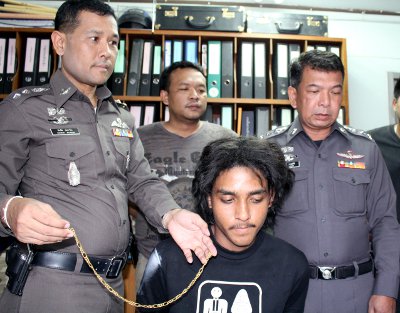 PHUKET: Phuket Police today arrested a Burmese man who robbed a gold shop in Karon last night and made off with nearly two kilograms of solid gold, despite being shot by the shop owner.

Burmese national Lacheman Kumar, 19, was arrested this morning at his home in Patak Rd Soi 10 in Karon, where he lived with his father, mother and girlfriend.

The arrest came after police officers keeping the house under surveillance spotted Mr Lacheman returning home on foot before sunrise.

In his statement to police, Mr Lacheman confessed to the robbery. He said he planned and carried out the crime alone.

“I went to watch the gold shop twice on Tuesday; I just wanted the money to go back to Burma,” he said.

Mr Lacheman explained that after the robbery, he drove to a rubber plantation in Rawai, where he dumped the motorbike and hid among the trees until about 5am.

“When I saw no one around I started walking back home,” he said.

“My girlfriend rented the motorbike, but she had no idea I was going to use it to rob the gold shop,” he added.

“Without their help we might not have caught him within 17 hours of the crime,” he said.

A search of Mr Lacheman revealed that he was carrying just one of the many necklaces he made off with from the Thong Thai Gold Shop in Karon, at about 7:30pm last night.

Still missing are necklaces comprising 10-bahtweight of gold (a Thai standard of one bahtweight equaling 15.1 grams of raw gold) valued at about 245,000 baht.

Shop owner Papan Aummaratta last night told police that Mr Lacheman came into his shop and asked to see items graded as having five-bahtweight in gold.

“The man said he was shopping for a marriage proposal gift for his girlfriend, but he asked to try on too many items at once, which made me suspicious,” Mr Papan explained.

“So without him knowing, I pressed the button to remotely lock the door. Soon after that, he demanded that I give him the gold, and he reached into his backpack. I thought he was going to pull out a gun, so I shot him through his right arm,” said Mr Papan.

“Then I fired another shot as a warning,” he added.

Mr Lacheman begged Mr Papan for his life and to be set free, but as Mr Papan put down his gun Mr Lacheman escaped with two trays of necklaces comprising a total of 1.963 kilograms of solid gold.

Spilling gold from the trays as he fled, the injured Mr Lacheman managed to get to his motorbike only to realize he was unable to drive and carry the two trays at the same time.

Leaving one tray behind, he rode away with the other carrying items comprising 453g of gold.

Police at the scene were able to hand back to Mr Papan the 1.51kg of gold that had either fallen from the trays or been discarded by the thief in his attempt to get away.

With Mr Lacheman in custody today, police learned that the teenager suffered only a minor injury to his right wrist.

Evidence recovered from the scene consisted of a hammer and a backpack, both belonging to Mr Lacheman. A search of the backpack revealed a knife, a replica gun and a Myanmar Ministry of Labor – Overseas Worker identification card in the name of Lacheman Kumar, age 19.