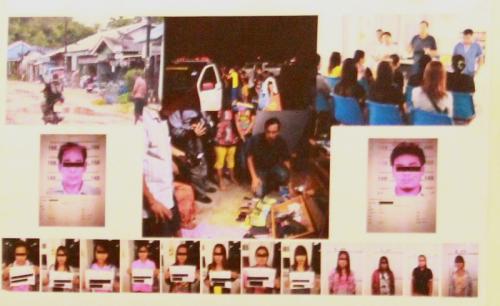 Three suspects were taken into custody for sex trafficking during the raids, and arrest warrants were issued for two others believed to be part of a human trafficking gang.

Agents from the Department of Special Investigation (DSI) were tipped off by the Myanmar Association in Thailand about two businesses which were offering sex services to their customers.

In Phang Nga, eight women were liberated when twenty officers from the DSI, Kuraburi police and Phang Nga Social Development and Human Security office raided the Baifern Restaurant in Kuraburi, located near a fish processing factory.

“We arrested one suspect and issued arrest warrants for two others who are still at large,” he added.

The women, all between the ages of 16 and 29, told police that they were forced to have sex with customers every day and were beaten if they refused to work.

The women’s cell phones and passports had been seized by the business owner, and they were never paid the 150 baht per customer they were promised, as the owner kept their salary to repay the debt he incurred for bringing them from Myanmar, the women explained.

“Six of the women are now at the Phang Nga shelter and two have gone back to Myanmar,” Col Weerasil said.

After the raid in Kuraburi, the DSI agents travelled to Phuket, where along with Phuket City Police, they rescued an additional four women who had been brought from Myanmar by the same trafficking gang.

Two suspects were arrested in that raid.