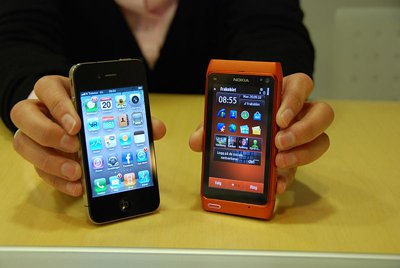 Heightened consumer demand has brought about a surge in sales volume of over 80%, reaching 758,000 smartphones sold in the first three months of 2012 (Q1).

Consumers in Thailand bought 3.8 million mobile phones in the opening quarter of this year, of which, only 20% were smartphones. Though feature phones are still largely used by Thais, their popularity has been waning as smartphone sales are on the rise. First quarter results of feature phone volume sales reported a decline of 12% over the same quarter a year ago.

“Feature phones are still dominating Thailand’s mobile phone market in terms of sheer volume, but when it comes to sales revenue, smartphones’ contribution to the overall value of the industry has surpassed feature phones,” said Dr Wichit Purepong, General Manager of GfK Thailand. “Takings for smartphones had already overtaken feature phones in the last quarter of 2011 when they reached 53% of total sales. The latest Q1 report showed that it has escalated further to hit 60%.”

Retail audit findings revealed that the average price of feature phones in the country has been dwindling in the last five consecutive quarters to reach a low of US$52.

In comparison, the average price of smartphones has remained generally consistent, hovering between US$300 and $329 during this same period of time.

Another trend in Thailand is the increasing penchant toward Android smartphones. As with most other markets in the region, popularity of such phones has been on an upswing. From its market share of 16% in Q1 last year, sales of Android smartphones have skyrocketed to reach 59% in the latest quarter.

“Smartphone penetration level in Thailand is considered low when compared with some of the other markets in the region like Singapore and Malaysia where a larger proportion of the population have already converted from their feature phones,” observed Dr Wichit.

“This presents huge potential for smartphone manufacturers and we can expect the rate of adoption to accelerate when telecom operators in the country fully roll out their 3G services in the very near future. It is predicted that the Thai smartphone market will more than double in value and volume in 2012,” he concluded.