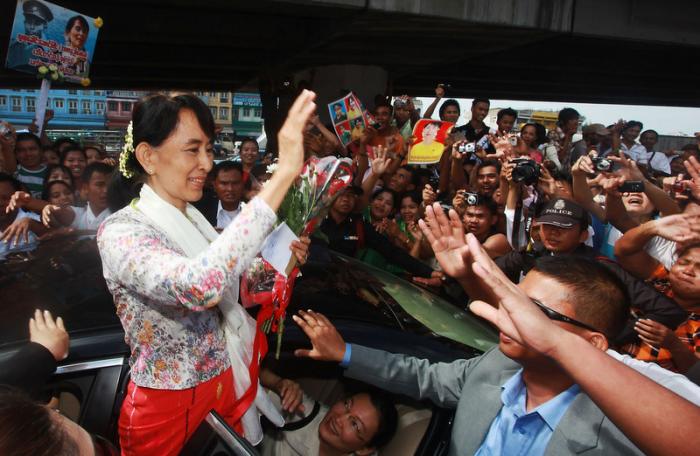 PHUKET: Nothing much will change for the 100,000 migrant Myanmar nationals currently living and working on the island, Phuket Employment Office director Pitoon Damsakorn told the Phuket Gazette, shortly after the visit to Thailand by the State Counselor of Myanmar Aung San Suu Kyi
last week.

Ms Suu Kyi’s arrival in Thailand last week for a three-day visit to meet with ministers and firm-up bilateral ties between the neighboring nations, saw the signing of three memoranda of understanding and agreements exclusively to deal with better management, facilitation and capacity-building for Myanmar workers.

Unofficially, about 4-5 million migrant workers, plus displaced people, are living in Thailand. For the past two years, 1.5 million workers have been registered, allowing them to work and receive social benefits, including education and healthcare. More registrations are expected in the coming months.

However, for the thousands of Myanmar nationals working mainly in Phuket’s construction industry, little will change as they “already earn more than the minimum daily wage of 300 baht for Thai nationals,” said Mr Pitoon.

“The Myanmar nationals working in Phuket are much better off than their counterparts in Samut Sakhon, near Bangkok, for example, where many are employed in the fisheries industry, receiving low wages and often going without pay when bad weather prevents them from working,” he said.

“Construction work is plentiful all year round for migrant workers in Phuket. They don’t have any problems with money at all.”

“The biggest problem we face in Phuket is tracking down migrant workers who continue to flout immigration laws,” said Mr Kriengkrai.

“Our greatest challenge is stemming the flow of Myanmar nationals involved in human trafficking, especially children,” he said, referring to Thailand’s Tier 3 status in the US annual report on Trafficking in Persons (TIP) since 2015.

However, the United States on Wednesday announced that it had decided to remove Thailand from its list of worst human trafficking offenders.

The upgrade, confirmed by a US official in Washington and a Bangkok-based official from an international organization with direct knowledge of the rankings, would mark a rare boost for US-Thai relations. Ties between the countries have stagnated since the Thai military seized power in 2014, in a move strongly condemned by Washington.

The State Department’s annual Trafficking in Persons (TIP) report, which was released last week, organizes countries into tiers based on trafficking records: Tier 1 for nations that meet minimum US standards; Tier 2 for those making significant efforts to meet those standards; Tier 2 ‘Watch List’ for those that deserve special scrutiny; and Tier 3 for countries that are not making significant efforts.

The upgrade puts Thailand on the so-called ‘Tier 2 Watch List’.

Phuket’s reputation as a destination for human traffickers was put under the international spotlight in 2008, after 54 illegal migrant workers, including an eight-year-old girl, suffocated to death in a tiny seafood container truck.

The ‘Ranong human-smuggling incident’ occurred on the night of April 9, 2008, when 121 illegal migrants were transported by fishing boat from Song Island in Myanmar to a landing near Ranong, where they were loaded into the container truck to be transported to Phuket. Each had reportedly paid the smugglers 6,000 to 10,000 baht for the journey.

The airtight seafood refrigeration unit on the back of a truck measured just six by 2.2 meters. When it was discovered, the 36 women, 17 men and the eight-year-old girl inside were all dead.

Thailand’s government says the situation for migrant workers has changed in the past two years due to the so-called ‘zero tolerance’ approach, adopted to counter human trafficking and slave labor. These efforts are still considered a work in progress by several international human rights groups.

Before departing last week, Ms Suu Kyi thanked the Thai government for taking care of migrants and urged workers to behave themselves.

“Myanmar workers in Thailand are guests of their host country, and should love, be honest with and behave well toward their hosts,” she said.

During Ms Suu Kyi’s first visit to Thailand four years ago, she openly opposed the government’s stance on migrant workers, and urged her countrymen to fight for their rights.