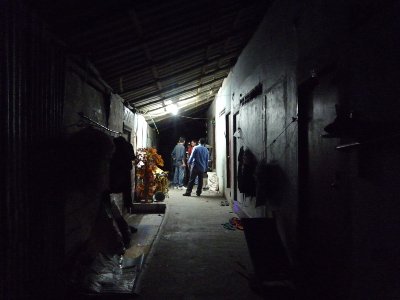 PHUKET: A Burmese worker died in Phuket Saturday after being shot in the head by an ethnic Mon assailant, police said.

Kathu Police duty officer Patapee Srichay said the man arrived at a workers’ camp located on Soi Khaun Yang, off Patong hill road, at about 10am.

He was in search of a Burmese man who was later identified by his work visa as 38-year-old Samran Suparb, police said.

As soon as he found Mr Samran in his small room, the suspect promptly shot him in his right eye, killing him.

Police found a handgun and bullet at the scene.

“We are now investigating what led the guy to murder Mr Samran, who just moved into the room about a week ago,” said Capt Patapee.

Police did not name the suspect, describing him only as a “Mon man”.

After the murder, most of the Burmese workers living in the area fled. They feared trouble would ensue if they got involved in the case, Capt Patapee said.

He declined to confirm that romantic jealousy was the motive the shooting, as reported by at least one media outlet.

Police don’t even know who the shooter was, let along the reasons behind his actions, he said.

The camp owner will likely be responsible for the body if no family members claim it, Capt Patapee concluded.

It is unclear why a Burmese worker would have his work permit issued under the name “Samran Suparb”, which is clearly a Thai name.

There could be as many as 200,000 migrant workers from Burma, a Senate panel meeting in Phuket heard in September.

Many if not most of these are not ethnic Burmese, but ethnic Mon living in lands under the control of the Burmese military junta.