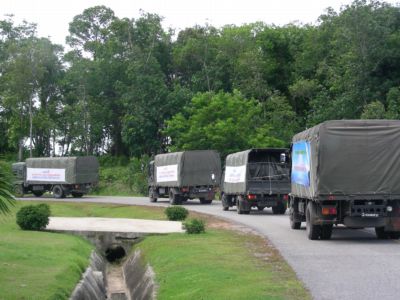 CAPE PANWA: Stocks of donated food and emergency-shelter supplies today finally began their journey from the Third Naval Command at Cape Panwa to help victims of Cyclone Nargis in Myanmar.

Approximately 10 tonnes of supplies were loaded onto four container trucks heading for the Thai-Myanmar Border Fishery Co-ordination Center in Ranong province. From there, the supplies are expected to be distributed to the cyclone victims in Myanmar by Burmese officials.

The Third Naval Command had been the main collection point for the many donations by local businesses, charities and individuals, although the Royal Thai Navy had been waiting for the stockpile to become large enough to warrant transporting the supplies to Myanmar in a single trip.

As the trucks rolled out, US Navy sailors and Marines began disembarking from three US Navy ships – USS Pearl Harbor, USS Dubuque and USS Benfold – which pulled into the nearby Deep Sea Port about midday.

While in Phuket for five days for “rest and recreation”, some of the sailors will lend a hand with some painting at the Phuket Special School in Pa Khlok.

“The school has a vocational training building for tailoring and a bakery. This building is 10 x 30 meters with a roof height of 8 meters, and we plan to paint the entire building inside and out,” said Brad Kenny of the Rotary Club of Patong Beach.

“A heavy task in two days, but the US Navy and Marines have around 90 volunteers signed up for the work and the Rotary Club of Patong Beach is organizing and prepping the site today and tomorrow,” he added.

Mr Kenny went on to explain, “These ships are part of a US Navy amphibious assault group and with their landing capabilities also serve, and are highly trained for, humanitarian assistance during natural disasters. They are in the area to use their disaster-relief capabilities in the event the Myanmar government gives them access up the delta area after the recent cyclone.

“They have on board up to four advanced hovercrafts that can travel up to 75 kilometers per hour with a range of 300 miles, and could delivery 60 tonnes of disaster-relief goods per sortie if allowed,” he said.