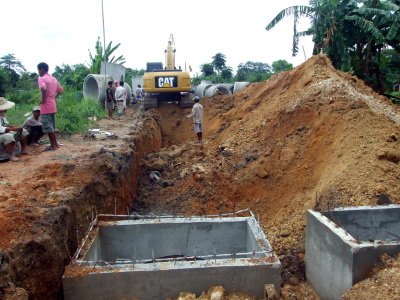 PHUKET: Another rainy season in Phuket, and yet another death from a landslide. The trench collapse on Monday that killed Burmese laborer Min Hla Thein came just nine days after new workplace ‘health and safety’ legislation came into effect.

Among the main aims of the new regulations is to make companies legally liable for not following safety requirements laid down by law and company policy.

Anyone in the construction industry would not have to look far to discover that when digging trenches in questionable earth, the first priority is to reinforce the walls to ensure that workers are not crushed by a cave-in.

Whether the lack of reinforcement of the trench walls will be unearthed by the “investigation” into this latest incident remains to be seen, but the news of another landslide death should not have come as a surprise. Phuket’s safety record in this regard speaks for itself.

Last year, project foreman Thawisak Nukaeo and a laborer identified only as “Neung” died while – in a bitter irony – they were building a retaining wall for a resort under construction on Soi Sang Krasee off Nanai Road in Patong.

The other worker caught by the landslide, identified only as “Sorn”, escaped death but was rushed to hospital for serious injuries.

In 2008, three Burmese were crushed by a landslide at a construction site on 50 Pi Road.

In 2007, a landslide off Nanai Rd left buildings hanging precariously while smothering a Burmese laborers’ camp below and trapping an 18-month-old child. Luckily, no one was killed in that incident.

Earlier this month guests and staff at the Orchidee Residences in Patong escaped almost certain death when boulders hurtled down from a road construction project high in the hills above them, crashing into the building, uprooting trees and bringing down countless tons of earth.

And just this week, several tumbling boulders threatened Orchidee and its occupants once again, the rocks having originated – again – from the very same construction site. [See story here.]

And all this follows year after year of public warnings and “landslide preparedness” training exercises. How much more warning do we need to stop the construction site carelessness?

One common denominator throughout all these landslides over the years is that the first to suffer are inevitably Phuket’s ubiquitous Burmese workers, the unsung heroes of the island’s construction boom.

But at least this year there’s something new: We have a person’s name to report, not just a nickname or a no-name somebody who paid with his or her life for helping to develop a “Greater Phuket”.

Perhaps now with a new death fresh in people’s minds, contractors might exercise more caution. The least they can do is to build the retaining walls and any other reinforcement barriers first and get on with the rest of the work thereafter.

Whether the island’s developers and contractors will start doing this as an “industry standard” remains to be seen, as does the matter of enforcement of the new regulations.