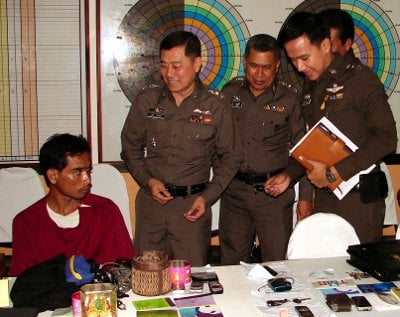 PHUKET: Police this afternoon presented a man who has allegedly confessed to committing no less than seven break-ins in Phuket Town late last month.

One of the houses robbed was the police accommodation home of the Capt Thapakorn Hanumard, who is the assistant to Phuket Police Commander Pekad Tantipong.

Maj Gen Pekad is the chief of police for the entire province, and Capt Thapakorn’s house is located directly opposite Phuket City Police Station.

Police said they arrested Uthai Suandokmai, 33, at his rented room in Saphan Ruam 1 community in Talad Yai, Phuket Town, at about 3:30pm yesterday.

In his room they found many items identified as stolen, including 10 sets of keys, five motorcycle keys, four car keys, two laptops, one camera, a passport issued to a Mr Suksawat Hitopakorn, three ATM cards, five mobile phones, five bankbooks (one belonging to Capt Thapakorn) and an assortment of Thai ID cards, among other items.

In the haul were keys to Phuket Provincial Police headquarters and to Capt Thapakorn’s car.

In tracking down Uthai, officers identified a laptop computer for sale at KPP mobile that was listed as stolen, for which the receipt was issued to Uthai, said police.

Police said U-Thai confessed to seven counts of burglary, including the robbery of Capt Thapakorn’s house at 5am last Friday.

Capt Thapakorn was out of the province visiting his family at the time.

He targeted houses with no one home and stole only valuables that could be easily carried away, and easily converted to cash, police said.

Police added that Uthai previously served 18 months in jail for buying stolen property: a motorcycle. He was sentenced in 2007.

Uthai, who passed the daylight hours as a welder, was charged for the seven break-and-enter crimes he confessed to, said police.

Maj Gen Pekad said Uthai was originally from Kanchanaburi province, but had changed his house registration about 10 times. “Police need to investigate more into why he moved so often,” he said.

Maj Gen Pekad also urged anyone who has been broken into recently to go to Phuket City Police Station in the hope they might identify some of their stolen property.

“Five victims have already identified items stolen from their homes,” he said.