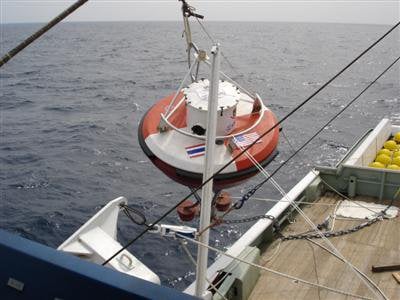 PHUKET CITY: The tsunami direct detection buoy launched from Phuket in 2006 is inoperable because the Thai agency responsible for maintenance has not been able to replace its battery, the Gazette has learned.

The Deep-ocean Assessment and Reporting of Tsunamis (DART) buoy was put into place 600 nautical miles northwest of Phuket early in December 2006.

After its deployment, maintenance of the buoy fell to the Thai government.

Funded by the US government’s USAID program, the buoy was the first of its kind deployed in the Indian Ocean.

It is linked to a highly-sensitive pressure sensor on the seabed that measures the mean height of the water column above.

This information is relayed to a satellite that links to the US government tsunami warning center in Hawaii.

Supplied as part of US$16.6 million in funding for the US Indian Ocean Tsunami Warning System (IOTWS) Program, the buoy gave Thailand for the first time the ability to detect directly any tsunami waves before they hit land. That ability is now history, the victim of a dead battery.

According to the US Government’s National Data Buoy Center, the buoy sent out the last of its 15-minute-interval signal messages on June 16 this year.

Chotenarin Kerdsom, who heads the Department of Disaster Prevention and Mitigation Phuket Office (DDPM-Phuket), confirmed that the buoy’s battery is dead.

“The original battery was designed to power the unit for one year, but fortunately it ran for two years. If we install a new battery it will resume sending its signals,” he said.

The National Disaster Warning Center (NDWC) that is now responsible for maintaining the buoy has yet to get budget approval to install a new battery, he said.

“They will have a chance to get a budget in fiscal 2010, but it will require approval from the Budget Bureau,” he said.

The buoy is not under Thailand’s complete ownership. The signals it transmits are first received at the US Government’s Pacific Tsunami Warning Center in Hawaii before re-transmission to Thailand, Mr Chotenarin explained.

The battery required is not expensive, but the mission to replace it would require a budget of at least 10 million baht, he said.

The buoy is in international waters and the round-trip mission would take at least five days using a large ship, preferably under escort of a Navy vessel to protect it from pirates, he said.

Until the existing buoy gets a new battery, the NDWC will have to rely primarily on seismic information when deciding to issue a tsunami alert, he admitted.