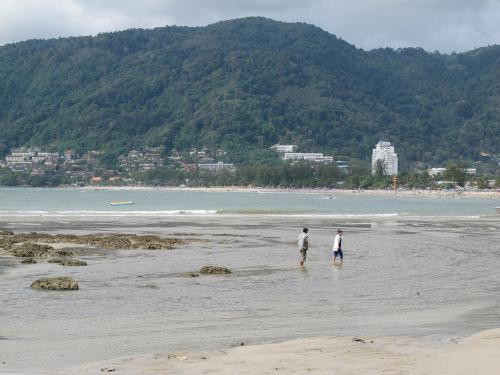 PHUKET: Phuket’s leading environment officer today speculated that the color of the seawater at Patong Bay turned an off-brown over the weekend possibly due to a “plankton bloom”.

The news comes two days after officials staged a press event, led by Phuket Governor Maitri Inthusut, promoting the launch of a campaign to regularly test the quality of seawater at Phuket’s key tourist beaches, starting with Patong (story here).

“The initial tests on Friday showed the seawater quality at Patong was within normal parameters,” Dr Pornsri Suthanaruk, director of the Phuket Environmental Office Region 15, told the Phuket Gazette today.

“However, we believe that the brown color of the water [today] might be the result of a plankton bloom,” she said.

Dr Pornsri explained that excessive amounts of “nutrients”, in the form of nitrogen and phosphorus, likely fed plankton growth in the bay, spurred on by the days of bright sunshine Phuket has recently enjoyed.

Regardless, Dr Pornsri maintained that her office would await test results from samples collected before taking action.

“The Phuket Marine Biological Center [PMBC] will test the water samples [collected on Friday] for coliform bacteria, total suspended solids and nutrients. We will also have experts collect samples of the plankton bloom to determine the exact type of plankton and what caused it to bloom,” she said.

PMBC Director Ukkrit Satapoomin told the Gazette today he had no doubt the bloom was the result of untreated wastewater being released into Klong Pak Bang, which discharges straight into Patong Bay at the southern end of Patong Beach.

“The are two main sources of wastewater that are emptied into the Pak Bang Canal. I would estimate that about 40 per cent is overrun from the wastewater treatment plant. The remaining 60 per cent is from residents, hotels and other private establishments in Patong,” he said.

“However, this requires a large budget and the problem has yet to be resolved,” he said.

Dr Ukkrit explained that his office has previously tested water in the canal.

“We found elevated readings of nitrogen and phosphorus, among other ‘nutrients’ [sic]. This could have come from only one original source: residents and businesses in Patong,” he said.

Meanwhile, it may take weeks for the bloom to dissipate from Patong Bay, Dr Pornsri explained.

“If the plankton bloom is not fed further, the brown water will return to its usual clear-blue color after about two weeks. Plankton has a short lifespan and will die off,” she said.

“In the meantime. Patong Municipality has been asked to forward water quality reports of hotels and companies operating in Patong to the Phuket Provincial Office of Natural Resources and Environment as soon as possible,” Dr Pornsri added.