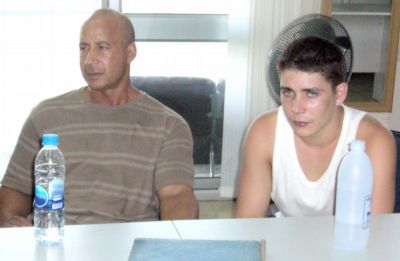 PHUKET CITY: A father, mother and son from the UK have been charged with using fake electronic cards to withdraw more than 100,000 baht from ATMs while on holiday in Phuket.

Capt Supachai Petchkul of Phuket City Police Station today told the Gazette that police received an anonymous phone call at 1:40 am yesterday reporting that two foreign men were behaving strangely in front of the Kasikorn Bank branch on Chanacharoen Rd, near the Robinson department store.

Police arrived to find Mark Hubert Veerasawmy, 44, and his son Sonny, 19, withdrawing cash from the bank’s ATM. Both were wearing small white masks that covered the nose and mouth, Capt Supachai said.

The pair were found in possession of 15 withdrawal slips, 10,000 baht cash and 35 fake ATM cards with a magnetic strip on one side and a two-digit and a four-digit number handwritten on the other side, he said.

“We took them to the police station, but we forgot to take their mobile phone, which they used to call Jennifer Anne Chapman, 31, from England, to tell her that they had been arrested,” Capt Supachai explained.

After questioning the father and son, police moved to the Mukda hotel in the Phun Pol area of Phuket City to search the two rooms the family was staying in.

“We went to their hotel and found his wife and baby girl, about two to three years old, in front of the hotel. We searched their rooms and found more than 100,000 baht in bundles separated by rubber bands,” Capt Supachai said.

He alleged that the phone call gave Ms Chapman the chance to dispose of the machine used to encode the fake cards with bank account numbers and PIN numbers.

“It would be great if we could get the machine because it would be useful as evidence. However, a motorcycle taxi driver parked near the hotel told police that [before police arrived] he saw Ms Chapman walking along the road with a black bag, but she returned to the hotel without it,” Capt Supachai said.

He added that they are now being held at Phuket Provincial Court.

The baby girl, who police did not name, has been handed over to the British embassy to be returned to the UK.

When is a Rooney not a Rooney?