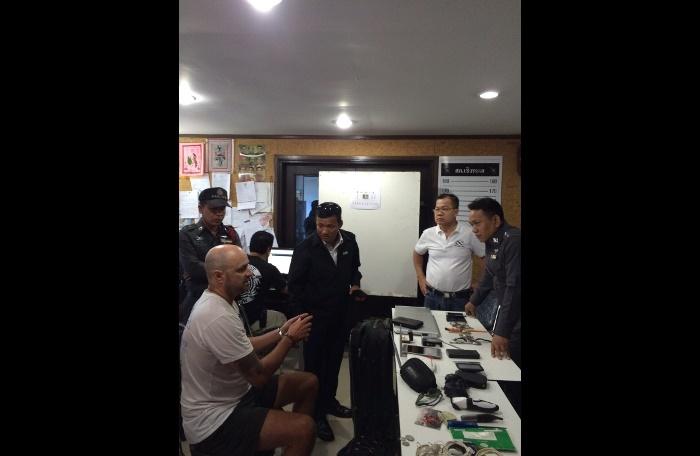 PHUKET: An elusive British serial burglar, who has been on the run from police for at least two years, was arrested yesterday in connection with another series of burglaries in Phuket.

Charlie Machin, 54, was apprehended at his rental house in Soi Na Koh, Cherng Talay, with 67 items stolen from at least three homes. He was previously wanted for robbing a Swedish man’s home in Kata of about 200,000 baht in valuables, in March 2015 (story here).

At that time, police had collected CCTV footage from cameras at the victim’s house, which showed Mr Machin breaking into the house. However, the Phuket Immigration Office could find no record of anyone with that name having arrived in Phuket.

“We checked the house and questioned others in the area to find more evidence. One of the neighbors told us that they had seen a suspicious looking foreigner on a black and red bike parked in front of Mr Kruhlik’s house. We checked CCTV footage and followed the GPS location on one of the stolen iPhones to apprehend him at his place of residence,” he added.

Police initially seized two iPhones, an Ipad, a Canon camera, a Macbook, two wallets, four passports, a pack of keys, a buffalo drive, a bag and a Yamaha bike, as well as the equipment he used to break into homes.

A further search of his house revealed 53 additional stolen items, including watches, laptops, phones, cameras, jewelry and glasses, among other items.

Mr Machin confessed to breaking into Mr Kruhlik’s house as well as several others in Kamala, Thalang and Sakoo. He said that he stored the items in his house until they were sold off one by one. He was charged with theft and taken to Cherng Talay Police Station.

“We have already informed the British Embassy about this. We have also informed all other police stations so other victims can contact us to check for their belongings,” said Col Serm.