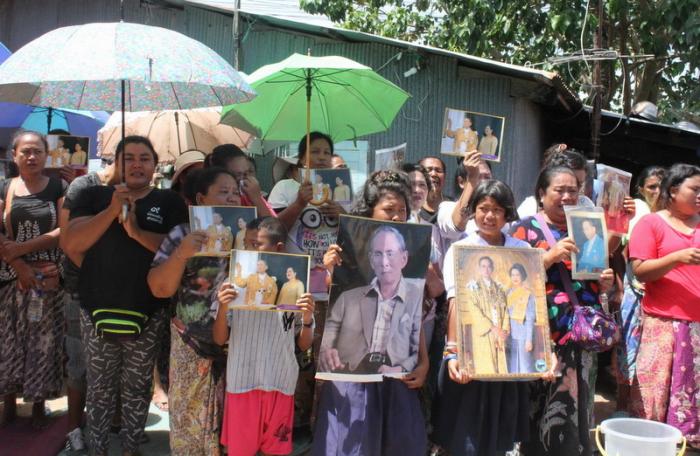 PHUKET: Officials are preparing to file complaints of land encroachment against Rawai sea gypsies after more than 200 of them gathered to prevent the demolition of two houses in Rawai yesterday morning.

“Suthep and Thawee Mookdee are the owners holding a chanote for this land,” said Legal Execution Department officer Chanothai Sukpen.

Mr Suthep says the land belonged to his ancestors and they had originally rented it out to the sea gypsies, who then built their houses there.

“After seeing that they were not maintaining the area well, we wished to stop renting to them, but they would not leave. That is when the problems started. We filed a court case and followed all the legal processes to remove them from the land. After an eight-year court case, we were finally granted victory,” said Mr Suthep.

A judge ruled in the land owners’ favor in August 2015 and ordered the sea gypsies to demolish their houses, but to no avail. In July last year, Legal Execution Department officers placed a court notice on the property, but no action has been taken by either side until now.

At least 50-100 officers from Chalong Police, Civil Defense Volunteers and others from Rawai Municipality were also present at the scene to prevent any unexpected violence. However, the current owners of the house, Maren and Anan Bangjak, were not present.

“We are not bullying them – in fact, they are bullying us. This is a court order, but they have no regard for that. We have filed two other complaints against them for land encroachment and for preventing officers from performing their duty,” said Mr Suthep.

Mr Anan’s wife, Suree Krasaechontharn, said that her family had been staying on the land for a long time, ever since it was a forest.

“My father had an arrangement with the land owner at that time. They said they would allow my family to stay here, but now they want us to move out. Where should we go?” asked Ms Suree.

“There are 19 of us who live together in the house. I will stay here because I have nowhere to go. I will die here because I was born here. I will fight for my right to stay here and not allow the land owner to demolish my house,” said Ms Khwanjai.

The sea gypsies arrived at the site with pictures of His Majesty King Bhumibol Adulyadej and chanted the Royal Anthem. Last month, four long-time residents were acquitted of land encroachment charges after coconut trees in the pictures of HM King Bhumibol’s 1959 visit to the area served as key pieces of evidence to clear them of charges (story here).

Sea gypsies have been claiming their right to the land where their forefathers first settled for years now, with several interventions by officials over the years (story here, here and here), but a long-term, universally accepted solution has yet to be found.