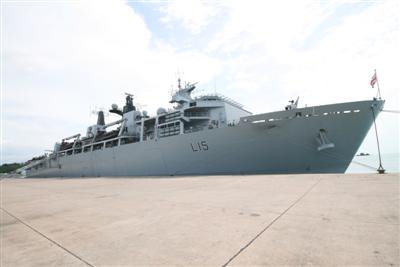 CAPE PANWA, PHUKET: One of the largest and most revered ships in the British Royal Navy, the HMS Bulwark, docked at Phuket Deep Sea Port yesterday morning flanked by the USS Mitscher, an Arleigh Burke class destroyer.

The 22,000-tonne HMS Bulwark – made famous for transporting 1,300 British escapees from Israeli air-strikes in Beirut in 2006 – has been operating in Southeast Asia for the past six weeks.

The stopover gave the ship’s crew of 540 men and women a chance to disembark for some well-earned R&R on the island until they ship out June 22.

The ship is spearheading the TAURUS 09 task force that includes 11 ships and one nuclear submarine that sailed from Devonport, UK in February.

Since then, HMS Bulwark has negotiated the hostile waters of the coast off Somalia, providing protection for civilian vessels as well as executing training operations in the jungles of Brunei with the 40 Commando Royal Marines on board.

Stored below deck in the ship’s well dock is an assortment of amphibious military hardware used to transport an Embarked Military Force (EMF). However, one of the most impressive on-board defense systems is the “Dutch Maid Goalkeeper” Close In Weapon System (CIWS).

The auto cannon is equipped with a radar to automatically select and prioritize the most threatening targets, such as incoming missiles, and fires 3,000 20mm rounds a minute to destroy them.

Speaking from the bridge, Captain Wayne Keble said the TAURUS 09 task force relies on co-operation between partners and allies from NATO countries. The task force also remains on alert for anti-piracy, humanitarian and disaster relief missions.

Capt Keble added that security forces from Bangladesh, Brunei, India, New Zealand, Saudi Arabia and the US had been involved in training operations with HMS Bulwark prior to her arrival in Phuket.

Accustomed to life at sea, Captian Keble said that he was personally looking forward to some sailing on his down time here in Phuket.

Crew members intended to play cricket, rugby and even try bungee jumping while in Phuket, he added.

Captain Keble and TAURUS 09 Commodore Paul Bennett had a busy first day on Phuket with visits to the Governor’s office, a meeting with Royal Thai Navy chiefs and then a cocktail party for local dignitaries and Phuket’s elite on the main deck of HMS Bulwark that night.