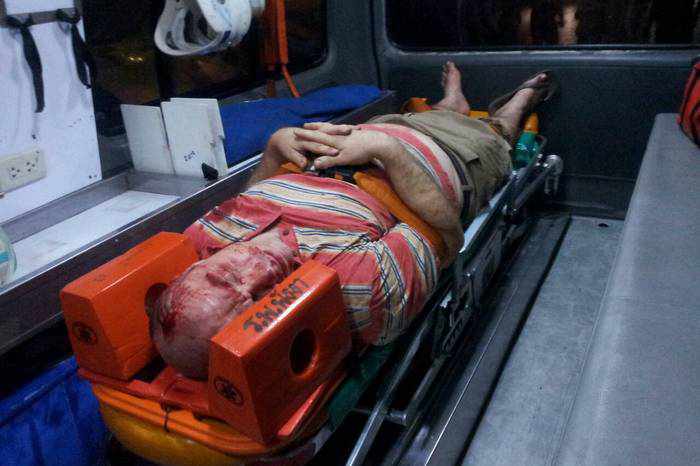 PHUKET: A British expat managed to escape life-threatening injury early this morning after a high-speed collision with a power pole in Koh Kaew left his Toyota Fortuner destroyed and the pole in a pile of rubble.

Maj Kittiphum Tinthalang of the Thalang Police was notified of the accident on Thepkrasattri Road northbound, about 100 meters south of the Tah Rua Shrine, about about 4:50am.

“At the scene, we saw the obliterated pole in pieces on the ground and the totalled Fortuner near the median,” said Maj Kittiphum.

Police named the driver as British national Arran Pritchard, 43, a resident of Srisoonthorn in central Phuket, and said he had been taken to hospital by Kusoldharm Foundation rescue workers before officers arrived.

“It was a miracle he made it out alive, considering the damage done to the car and the pole. I believe his seat belt saved his life,” said Maj Kittiphum.

A staffer at Vachira Phuket Hospital, where Mr Pritchard is now recovering, confirmed to the Phuket Gazette this morning that the Brit was stable.

“Mr Pritchard is conscious and responding well to treatment. He has a few cuts and bruises, but no broken bones. He is recovering and doing fine,” the staffer explained.

Police have not yet determined the cause of the accident.

“We are now investigating possible causes. We are also waiting on the results of blood-alcohol tests from the hospital,” Maj Kittiphum said.