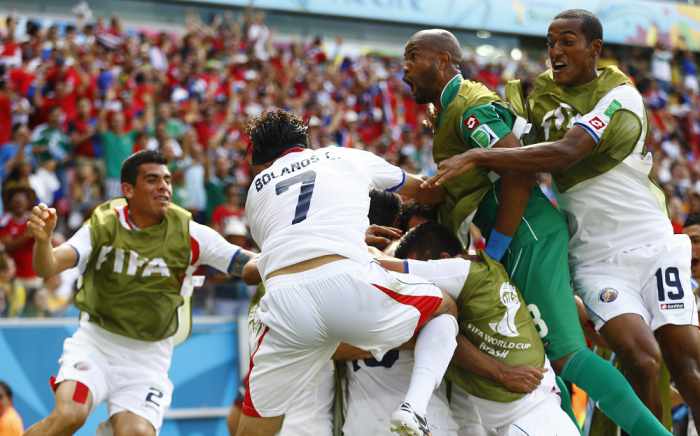 After yet another upset in Brazil, Costa Rica’s win put them top of Group D and eliminated England, while Italy and Uruguay must now fight it out for the other qualification spot when they meet in Natal on Tuesday.

Luis Suarez will be fit for that game, a huge boost to Uruguay’s chances after he scored both goals in a 2-1 victory over England on Thursday.

That will add to concerns for Italy after they were humbled by unfancied Costa Rica in another fairytale twist to a World Cup full of surprises.

Bryan Ruiz’s header in the first half separated the sides, leaving delirious Costa Rica fans dancing in the sunshine at Recife’s Pernambuco arena after a second successive win.

“We kept up our heads. It was a beautiful match… The people of Costa Rica deserve this. They supported the team and me. This was for them,” said ecstatic coach Jorge Luis Pinto.

Italy coach Cesare Prandelli sought to stay positive ahead of the Uruguay clash, with his side needing only a draw to qualify due to superior goal difference.

“Right now I don’t think we need to be negative, we need to think about recovering our energies because we have another game in a few days’ time, we play against Uruguay and whether we qualify depends on that,” Prandelli told reporters.

He also refused to blame the midday tropical heat in Recife for the defeat.

“We know about the calendar, we’ve known it for some time,” Prandelli said. “It’s useless to try and find excuses, we’re not looking for excuses, we have to be ready at the kickoff.”

A Brazilian judge on Friday ordered FIFA to follow its own guidelines and stop play at all World Cup games every 30 minutes for a water break if the temperature is 32 degrees Celsius (90 Fahrenheit) or higher.

FIFA played down the significance of the decision.

“We did not reach or exceed 32 degrees at any moment in any game so far,” FIFA spokeswoman Delia Fischer said.

“The court is only ordering us to follow our own procedures which we have always planned to do.”

There was no upset in the second match, with France beating Switzerland 5-2 in Salvador in an entertaining, end-to-end game full of chances that was great viewing for the neutral.

For Switzerland coach Ottmar Hitzfeld it was an altogether more painful experience as he watched his defence torn apart by wave after wave of attacks from France’s forward line.

The emphatic win continued France’s World Cup rehabilitation as they seek to bury the ghosts of four years ago, when a player revolt left their reputation stained.

“That was a very good match, we did a lot of things right,” France coach Didier Deschamps said in a television interview.

At 5-0 down, Blerim Dzemaili brought respectability to the scoreline, driving home a long-range free kick that slid under the French wall.

Granit Xhaka added a second with a fine volley close to full time, making it the highest scoring game of the Brazil World Cup so far.

The result left France top of Group E with six points, ahead of Switzerland on three. The group remains wide open, however, with Ecuador and Honduras meeting in the evening game and all four teams in action again on Wednesday.

On Saturday, Argentina meet Iran in Belo Horizonte and Nigeria take on Bosnia in Cuiaba in Group F. Germany face Ghana in Group G in Fortaleza.

Argentina coach Alejandro Sabella has confirmed he will start with the more attacking 4-3-3 formation favoured by Lionel Messi, and, even at a tournament as unpredictable as this, a win for Iran is almost unthinkable.

“I would bet all my stakes on Iran because this is my personality,” he said on the eve of the match.

The coaches of England and Spain, both out of the tournament in shock early exits, won the backing of their respective soccer authorities on Friday.

The Spanish soccer federation (RFEF) said it wanted Vicente del Bosque to remain in the job despite the team’s failure at the World Cup finals in Brazil, according to secretary general Jorge Perez.

And the chairman of England’s Football Association, Greg Dyke, similarly voiced support for Roy Hodgson, saying that, despite the disappointing results, the future looked brighter.

“There are a lot of young players who got blooded here and got into tournament football,” he said.

There was tragedy off the pitch as the Ivorian Football Federation confirmed that the younger brother of Kolo and Yaya Toure died in Manchester aged 28.

Media reports said he died after a short battle with cancer.

It is unlikely the Toure brothers will depart the World Cup. Ivory Coast play their last Group C game in Fortaleza on Tuesday with a chance to qualify for the knockout stage.