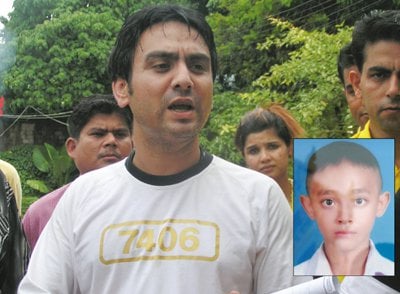 KATHU: Englishman David Murray, 37, has been charged over the death of his eight-year-old stepson, Narid “Curry” Budtharai, who allegedly died after his head hit the floor while he was being beaten for being a poor student.

Curry’s mother, Ramida Murray, 32, a Thai national, told police that for three years she and Murray had been living together with her two sons from a previous marriage, Tony, 10, and Curry.

Curry, a student at Thairath Wittaya School, had been receiving poor grades for two years, said Col Passakorn, who added that last year Curry’s parents warned their son about getting poor grades at school.

A week before his death, Curry’s parents received a phone call from one of his teachers saying that Curry was having trouble keeping up at school, he said.

“On July 11, Murray repeatedly hit Curry with a length of blue PVC pipe,” Col Passakorn said. “Curry was not allowed to go to school the next day because of his bruises and not allowed any food,” he quoted Ramida as saying.

“Curry wet his bed and for this Murray beat him with the PVC pipe again until the pipe broke,” Col Passakorn said.

“His mother told Curry to apologize for the bed wetting, but he didn’t say a word. This made Murray angry again and he kicked the boy in the chest. Curry fell and was knocked unconscious when his head hit the floor,” he added.

Murray then stopped his attack and tried to revive Curry, but his efforts failed and Ramida took the boy to Phuket International Hospital, where he was pronounced dead on arrival.

“Murray disappeared, taking some cash and jewelry from his home with him. He later sent an SMS to Ramida about 11 pm that night saying he was sorry for what he had done. He told her he was contemplating suicide,” Col Passakorn said.

Ramida tried to call him back but was unable to get through, he said.

“Ramida said that although David hit the child in anger she didn’t think he intended to seriously injure him,” he added.

On Friday morning, after Ramida was finally able to contact Murray by phone, the Englishman turned himself in at Tung Tong Police Station, where he was charged with murder without intent.

He had spent the night before at a guesthouse in Patong.

At Curry’s cremation at Wat Ketho, Curry’s natural father, Pissanu Badtharai, was outraged by his son’s death. Told by Ramida’s sister that Curry had died in an accident, K. Pissanu only learned of the bruises on his son’s body when he saw Curry’s corpse in the casket ready for cremation.

“I don’t understand why the doctors say that it was an accident. Surely they can see the bruises on my son’s body. I want doctors to perform another autopsy, so I will not let him be cremated,” said K. Pissanu, a Nepalese national.

However, after police showed K. Pissanu that the cause of death reported on the death certificate was “wounds sustained from blows” he allowed the cremation to proceed.

Tuanjai Thubklin, Murray’s neighbor in the same condo block, told the Gazette, “I have known them for a long time. On that day, my husband and I were going to the beach, but I got a call from Ramida saying that her son had died. So I went to see her and we took her son to the hospital.

“I am really shocked about this because Ramida’s family seemed happy. One time, though, I saw them hitting Tony. I told them that if I saw them hurting their sons again I would report them to the police. Ramida told me that their sons are naughty, so they had to punish them,” K. Tuanjai said.

“The boys never spoke about this to other people,” she added.

To substantiate his claims that his sons were being abused, K. Pissanu yesterday showed the Gazette Tony’s back, which was covered in bruises and scars.

“Tony is autistic,” said K. Pissanu. “He cannot talk. He can only make noises.”

Another neighbor, whose children were friends with Curry, told the Gazette that Curry sold keyring dolls outside the local 7-Eleven for pocket money every evening.

“When Prince of Songkhla university held events, he’d also sell the dolls there until 11 pm. He once asked my son to borrow money to buy snacks, but my son had none to lend him so he used some of the money he made from selling the dolls to buy snacks. After he did he asked my son not to tell his mother because he was afraid of how she would react,” she said.

Murray, who has yet to be arraigned, is being held at Phuket Provincial Prison.