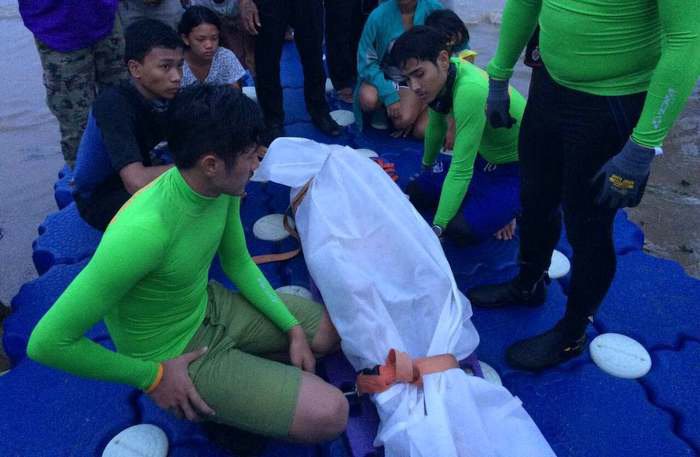 PHUKET: A 13-year-old boy drowned off Koh Sireh yesterday after his friends were unable to save him and did not report the incident to adults or authorities for nearly three and a half hours.

Payu Pairiron, a student at Baan Koh Sireh School, drowned at about 1.30pm after becoming too tired to swim back to the floating walkway.

“We started swimming at about 12.30pm. About an hour later, while we were swimming back to the walkway, he shouted that he could not swim anymore. I was the closest to him and tried to get him, but couldn’t help him. So he went down in the water,” said Nong Payu’s friend Kiattisak Thongkaew, 11.

Lt Ronnaphum Permpoon of the Phuket City Police and Kusoldharm rescue workers received the report at about 5.45pm.

It took 30 minutes for rescue workers to recover Nong Payu’s body from the water.

Nong Payu’s mother Yawaluck Pairiron, 32, told police that her son’s friends told her about the accident some time after 5pm.

“As soon as I found out I called the police, but it was too late,” she said.

Nong Kiattisak said that the boys weren’t swimming very far from the floating walkway when the accident happened.

Ms Yawaluck does not blame the boys for her son’s death and understood that it was an accident.

“We were afraid to tell his parents and other adults. We were searching for him but we could not find him. It started getting dark outside, so we decided to tell his mother,” said Nong Kiattisak. “We are so sorry that he died. We didn’t know what to do.”

Lt Ronnaphum confirmed that there were no signs of trauma to the body and believe that Nong Payu may have suffered a cramp, making it difficult for him to swim.

Nong Payu’s body was taken to Vachira Phuket Hospital to verify the cause of death.