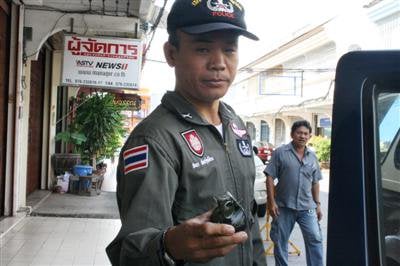 PHUKET: A shopping bag containing a live hand grenade was found hanging from the front door of the ASTV television network office in downtown Phuket Town this morning.

Phuket City Police were informed by the Phuket Special Branch Police at about 9am that someone had called in to report that a bomb had been placed at the office, located in a shophouse complex on Soi Nimit 1, off Chana Jaroen Road.

The office is also home to the local office of Manager Daily newspaper and the Manager Online website, all owned by media mogul and People’s Alliance for Democracy (PAD) leader Sondhi Limthongkul.

Officers attached to the Border Patrol Police Unit 422 bomb disposal unit were called in to inspect the device, which was wrapped in electrical tape and placed in a box inside a brown paper shopping bag that read ‘fight global warming’.

The bomb experts removed the device, an M67 fragmentation grenade with its pin still in place.

When detonated the device has an average ‘casualty radius’ of 15 meters, with a fatality radius of five meters, but fragments can reach as far as 250 meters from the point of detonation.

Office representative Prasert Fuangfoo said he thought the grenade was planted as a threat or to ratchet up political tension in Phuket, which has thus far been spared the kind of political strife suffered in Bangkok in recent months.

The office’s various media outlets had not printed or broadcast any provocative reports that would warrant such an act and none of the staff were involved in any personal disputes that would justify an attack on someone’s life, he added.

After the device was taken away by the explosives experts Mr Prasert went to file a complaint at Phuket City Police station, where he also requested stepped up security for the office.

Staff at the office were shocked and greatly upset by this morning’s developments, he said.