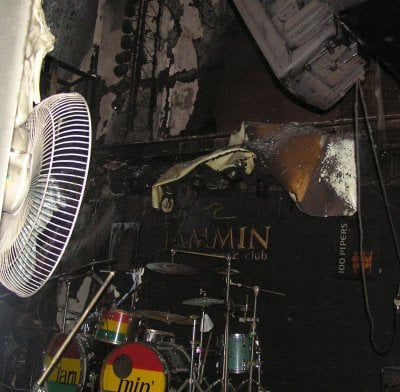 PHUKET CITY: Fire broke out in the popular Jammin’ nightclub early this morning, causing damage estimated at between 2 million and 3 million baht. No one was hurt in the blaze.

Co-owner Mel Purdue told the Gazette this afternoon, “It would appear not to have done too much structural damage. Unfortunately it was the DJ pit, and it looks like [the cause] was faulty wiring.

“It’s [caused] about 2 to 3 million baht’s worth of damage, but we can’t ascertain [exactly how much] yet because we’re waiting for the insurance assessors to come and have a look.”

Mr Purdue and his wife took over the popular city nightspot in October, and spent more than 1 million baht on upgrading the decor and sound system.

The club was experiencing a resurgence in popularity. “Last night we were packed with about 300 people, ” he said.

Mr Purdue added that he expected the club to reopen “in about a month, but hopefully sooner”.