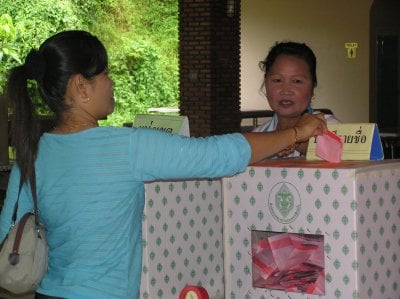 In District 2, counting of votes from two polling stations has yet to be completed, but the unofficial tally so far indicates that Wisut Santikul, also of the TRT, has also failed to get elected.

Dr Sriyada garnered a total of 11,910 votes, but these were far outweighed by the 41,903 “no votes” cast by voters in District 1. Even discounting the “no votes”, Dr Sriyada’s tally was far short of the 20% of all registered voters required for an unopposed candidate to be elected; she polled 12.04%.

K. Wisut has so far received 13,088 votes – 12.53% of the total electorate in District 2. A total of 49,181 people ticked the “no vote” box on their ballot sheets. An official result is expected later this morning.