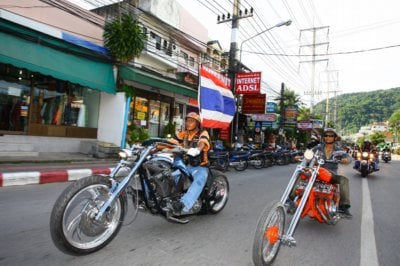 PHUKET: Organizers of Phuket Bike Week have reported record-breaking attendance at this year’s event with about 7,000 bikers and enthusiasts making their way to the island from ‘chapters’ all over the world to take part in a variety of activities that were held between April 10 and 12.

According to estimates by the organizers, the event has brought about 70 million baht into the province, with each participant spending about 10,000 baht over the week.

Between stage performances and award-giving ceremonies at Patong Beach, which included a concert by Thai Reggae music legend Job 2 Do, the organizers expressed their gratitude to Patong Municipality and to the Phuket Provincial Police for facilitating this year’s event. They also hailed the event a roaring success, with no accidents reported and with the participants projecting a message of world peace and unity.

Khun Tu, a biker from Pattaya, told the Gazette, “We are trying to build a campaign of peace because we know what it’s like to be young and hot headed. We want people to love each other and bring peace to Thailand.”