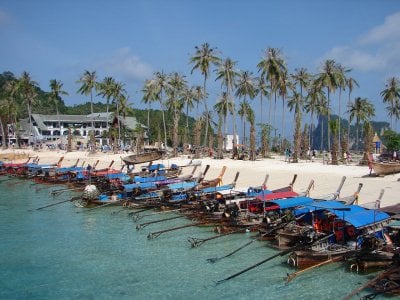 They were hoping for solutions to many tsunami-related problems, especially an end to the ban on building permanent structures, but came away shaking their heads in disappointment at the continuing lack of progress.

Phankam Kitithorakul, Chairman of the Ao Nang Tambon Administration Organization (OrBorTor), the local authority responsible for the Phi Phi Islands, told the Gazette that he was unhappy with the result of the meeting.

It was the same as all the previous meetings held to discuss Phi Phi’s future, he said – a lot of talk but no decisions.

“I expect that the next meeting, scheduled for January 27, which will be chaired by the Governor of Krabi, will also result in no progress,” K. Phankam added.

The meeting was scheduled to begin at 9:30 am, but did not get underway until DPM Suwat’s helicopter touched down just before 11 am.

The Deputy PM ordered the Director-General of the Marine Department, Tawanrat Onsira, to speed up the rebuilding of the pier at Phi Phi but heard that, despite the passage of a year, the department had yet to receive satisfactory bids for the 200-million-baht project.

Nonetheless, he took the opportunity to admonish local longtail boatmen, saying, “After the new pier is finished, boatmen here must do things in a much more orderly and safe way – such as picking up tourists and delivering them at the pier.

“We must turn back Phi Phi back into a paradise for tourists, so there must be no more mooring of boats along the beach, as there is now,” he said.

DPM Suwat also ordered the Organization for Specific Areas Administration for Sustainable Tourism Promotion (OSAASTP) to speed up construction of evacuation routes on Koh Phi Phi Don, saying that when this job was complete, “everything can start”.

He appeared to step back from the original government announcement that no rebuilding would be allowed, ever, on the low-lying land between Ton Sai Bay and Loh Dalam Bay.

“We banned construction,” he explained, “because we were worried that if we announced that people could start rebuilding, they might [block] areas through which we plan to have evacuation routes.”

The Director of the Organization for Specific Areas Administration for Sustainable Tourism Promotion (OSAASTP), Dr Salawud Chiayowan, said that it would take another six months of planning before work could begin on the evacuation routes. On hearing this, the crowd booed.

But when DPM Suwat insisted that planning be completed within a month, the crowd cheered.

Representatives of the boatmen asked the Deputy PM to waive the national park fee imposed on those visiting Maya Bay, because, they said, the number of tourists had gone down since it was introduced. The fee was recently increased to 200 baht per head for foreigners.

However, the Director-General of the National Park, Wildlife and Plants Conservation Department, Damrong Phidet – whose officials have been particularly zealous in their collection of the fee – said that if the fee were waived for Maya Bay, then fees would have to be waived for all national parks throughout Thailand.

DPM Suwat waved off further questions, saying, “I will leave the problem of permanent housing for tsunami victims, the evacuation route, and water and electricity supply to the next meeting with the Governor of Krabi on January 27.”

He then checked out the still unreconstructed pier before heading back to his helicopter.