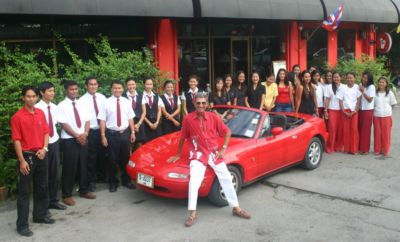 A native of Florence, Italy, Bepy had lived in Phuket for 15 years and was well known here, especially in Cherng Talay where his popular Toto restaurant stands at Tinlay Place on the road into the Laguna resort complex.

Bepy was also well known for starting the Mulligan Golf Association nine years ago, a fun golf club which many hold as testament to the man’s lighter outlook on life.

His friend Graham Doven said, “He told me many years ago that if he died, he would want his friends and family from Thailand, the country that he loved and adopted as his home, to enjoy his restaurants, food and wine as a celebration of his life. I think they will definitely respect his wishes, but for now we will miss him.”

People can pay their respects at Wat Cherng Talay from 7 pm today.